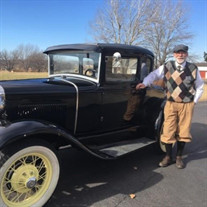 ALAN EDWARD SCHMIDT - July 20, 1944 – Sept 16, 2020 Alan Schmidt, 76 of Claremore, OK passed away on September 16, 2020. He was at home and surrounded by his life partner and family. Alan was born July 20, 1944 in Sturgeon Bay, Wisconsin to the late Milt and Nonnie Schmidt. After graduating from Menominee High School in 1962, Alan entered the United States Air Force Academy’s 1st Squadron, Class on 1967. Alan graduated with a degree in Civil Engineering. The members of his squadron were lifelong friends and have kept in touch and attended reunions and gatherings over the last 50+ years. Captain Alan Schmidt’s military specialty as an Air Traffic Chief Controller brought him an offer to attend Air War College, but instead he decided to return to civilian life. Alan married, started a family, competitively parachute jumped, earned his pilot’s license and completed a Master’s Degree in Environmental Engineering at Vanderbilt University. Professionally, Alan pursued a career with the Corps of Engineers, Radian Corporation and ultimately retired from the Aviation Division of the Texas Department of Transportation. Privately, Alan gave of himself as a volunteer for CASA Child Advocacy, Vessel Church Care Ministries, Ruidoso, NM Animal Shelter Board of Directors, Bonham, TX Airport Board and the Patriot Guard Riders, to name a few. He never hesitated to reach out to someone in need. Those he met along the way, squadron buddies, coworkers, Model A owners, all remained life-long friends. One of Alan’s greatest loves was his childhood cabin in Cedar River, Michigan. Family and friends that gathered there over his lifetime shared his love the God’s great outdoors. Alan will be remembered for his generous approach towards life and people, his capacity to be excited about little things, his carefree innocent nature and his huge heart full of love and trust. Known by some as “AQ”, “Tink”, or “Uncle Al the Kiddies Pal”, his most beloved name was “Papa”. His grandchildren meant everything to him. Alan is survived by his life partner Jamie Slack of Claremore, OK, his daughters Beth (Jeff ) Nason of Perronville, MI and their children Maxwell and Lily; his daughter Anne (Ryan) Gold of Leander, TX and their children Saige and Kaleb; Jamie’s daughter Heather (Matt) Isaacs of Claremore, OK and their children Eleanor and Caliger. Also his nephews and niece David (Amy) Schmidt of Plymouth, MN; Julie (Deron) Berkhof of Rochester, NY and Brad (Karla) Jolin of Middleton, WI. Grand nephews and niece include Lucia, Miles, Bryce, Sam, Cooper, Ethan and Aaron. Alan was also preceded in death by his brother Mike Schmidt and his sister Kerry “Skeeter” Jolin. Alan’s open road and clear skies philosophy of life was given flight with his Ryan PT-22 Recruit Aircraft, Cassutt Special, Harley Davidson motorcycle, and his Ford 1931 Model A Coupe, to name a few. He ran the race at his own pace and instead of stopping at the finish line, God opened the doors of heaven for him and he ran through them to his new home. Heaven will be a better place with him in it. In lieu of flowers, Alan wanted donations made to the Vessel Church Children’s Center. Donations and condolences can be sent to Jamie Slack, 15702 E Pony Lake Dr., Claremore, OK 74019

The family of Alan Edward Schmidt created this Life Tributes page to make it easy to share your memories.

Send flowers to the Schmidt family.