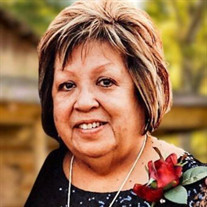 Funeral service for Aletha Brassfield will be 2:00 p.m. Friday, November 5, 2021, at MMS-Payne Funeral Home in Claremore. Burial will be at Lone Elm Cemetery. Visitation will be Thursday, November 4, from 1-7 p.m., with family greeting friends from 5-7 p.m. Aletha passed away at her home in Claremore on Tuesday, November 2, 2021. She was 65 years old. The daughter of Harry G. and Sophia (Collier) Fields was born November 26, 1955, in Wichita, Kansas. As a young child, she moved with her family to Claremore. There she would attended school, graduating with the class of 1973. Following graduation, she attended Draughn's Business School in Tulsa. Her first job following Draughn's was working for Gerald R. Griffith. She would later begin dating David Brassfield, and the two were married on November 9, 1984. The newly wed couple would make their home in Claremore. After her husband passed away in 1999, she returned to working at Mini-Mart, retiring in 2004. Around 2010, Aletha decided to return to work and took a job with Claremore Public Schools working in the cafeteria. She would retire in 2021 due to her health. In her spare time, Aletha enjoyed many pursuits. She loved sewing, shopping, camping, crafting, riding dirt bikes, and simply being outdoors. She cherished time spent with her family. Those preceding Aletha in death are her parents, husband David, and daughter Lesli Fields. Survivors include her children Amber Brassfield and her son Brooks whom Aletha considered her pride and joy, Kyle Brassfield and wife Ashlyn, Cindy Wilson and her daughter Mady, and Justin Brassfield and his son Logan; brother Scott Fields; and sisters Valerie Fields and Holly Turner, along with many extended family members and friends. View and sign Aletha's online memorial at www.mmsfuneralhomes.com.

Funeral service for Aletha Brassfield will be 2:00 p.m. Friday, November 5, 2021, at MMS-Payne Funeral Home in Claremore. Burial will be at Lone Elm Cemetery. Visitation will be Thursday, November 4, from 1-7 p.m., with family greeting friends... View Obituary & Service Information

The family of Aletha Brassfield created this Life Tributes page to make it easy to share your memories.

Funeral service for Aletha Brassfield will be 2:00 p.m. Friday,...

Send flowers to the Brassfield family.