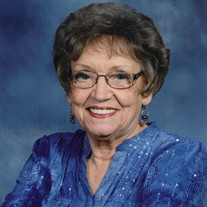 Funeral service for Yvonne England will be 10:00 a.m., Friday, March 26, 2021 at North Park Trinity Baptist Church, burial will follow at Woodlawn Cemetery. Friends may visit at the funeral home on Thursday, March 25, from 1pm-8pm, with family receiving visitors from 6pm-8pm. Yvonne passed away on Friday, March 19, 2021. She was 84. Alice Yvonne England was born February 14, 1937 in her family home in Sequoyah, Oklahoma to Thomas Alexander and Wilma Marie (Reed) McClurg. She attended Sequoyah Public Schools and was one of 13 in her graduating class of 1955. While in school, Yvonne was active in 4H and Basketball. On April 29, 1957 Yvonne married Kenneth England and the couple made their home in Claremore over the next 40 years until his passing on November 25, 1997. Yvonne's working career in banking spanned many years until she retired from Grand Bank in 2007. Yvonne was known for her quick wit, her infectious smile, and her kind and compassionate spirit. She regularly played bridge in several card playing groups in town. She had many hobbies that included crafting, sewing, shopping, and painting, to name a few. Yvonne always placed her family first and attended any event they were a part of. She cherished relationships with her lifelong friends. Yvonne was a member of North Park Trinity Baptist Church. Yvonne was preceded in death by her husband, both parents, and brother Thomas Eugene McClurg. Those who survive include her daughters and sons-in-law Kendy Peterson and husband Tim of Claremore and Kelli Dixon and husband Dru of Talala; grandchildren Jessica Melson and husband Patrick, Garrett Peterson and wife Emily, Ty Dixon, Kyah Dixon, and Kenly Dixon; greatgrandchildren Dalton Tucker, Shay Melson, and Kye Melson; and a host of beloved nieces, nephews, and cousins.

Funeral service for Yvonne England will be 10:00 a.m., Friday, March 26, 2021 at North Park Trinity Baptist Church, burial will follow at Woodlawn Cemetery. Friends may visit at the funeral home on Thursday, March 25, from 1pm-8pm, with family... View Obituary & Service Information

The family of Alice Yvonne England created this Life Tributes page to make it easy to share your memories.

Send flowers to the England family.