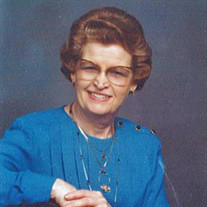 Alice passed away in the early morning hours of March 17, 2021. She was 86 years old. Arrangements for cremation have been made. However, there will be no public funeral service, as she had often indicated this desire for her final days on earth.     Alice Ann Robinson was born on September 11, 1934, in McAlester, Oklahoma. To be more specific, she was born in North McAlester, better known to those living there as, North Town. She was the first born, the daughter of William A. {Bill} and Thelma {Douglass} Drumb. She grew up in McAlester and graduated from McAlester High School in 1952. Alice was a lifetime member of First Baptist Church in McAlester, and regularly attended until her marriage to John A. Robinson in June 1952. She followed John during his career in the United States Air Force, including an assignment to Ramey Air Force Base in Puerto Rico and Air Force units throughout the Midwest.   Alice's marriage to John resulted in two daughters, Alice Kay and Donna Ruth. Kay, an Historian, is married to Harvey Little, a CPA, and lives in Bartlesville, Oklahoma. They are parents to Jeremy and Stephen. Jeremy is married to Melissa and are parents to Caleb and Olivia. They live in Bartlesville, Oklahoma, where Jeremy is a pastor at a local church and  the media technician for a local auto group. Melissa is Office Manager of the Nursing Department at OWU, leads a group of young people at their church and does professional sports photography for several local teams. Stephen is married to Debbie and are parents to Isa and Noah. They are affiliated with the Dare To Be, Inc., where they have the opportunity to serve Quito, Ecuador, ministering to the peoples there. Donna, Receptionist/Ministry Assistant at Claremore FBC is married to Michael Wagner, Quality Inspector, and lives in Claremore, Oklahoma. They are parents to Alicia and Julie. Alicia is married to David Gunn and are parents to Madison. They live in Indianapolis, Indiana where Alicia is the Director of Refugee Services for Indy Internationals, a platform of Pioneers and David is a Service Technician. Julie is married to Ricky Clifton and are parents to Mackenzie and twins Tanner and Addison. They live in Oologah, Oklahoma where Julie is a Dispatcher for the Rogers County 911 Center and Ricky is on the Site Service Crew for PSO/RSO.    Alice was dedicated to the raising of her daughters and was able to be a stay-at-home mom throughout their elementary and high school years. She was an active leader in the Girls Auxiliary of the First Baptist Church of Sherman, Texas where Kay and Donna progressed through the program's steps to obtain recognition as Queen. Alice and John became active members in a local Baptist Church in each city wherever John was stationed with the Air Force. She was especially pleased to involve her time in the administrative duties within the Sunday Schools of each church where she was a member. Alice was also active in the churches’ sanctuary choirs where she sang in the alto section. Following John's retirement from the Air Force, the family moved back to McAlester, Oklahoma where Kay and Donna completed their high school education, and John became employed with the Oklahoma Employment Security Commission. Alice successfully managed the contract post office in North McAlester for a brief period of time until she determined that the rigors of the U.S. Postal Service were not her "cup of tea". She continued to follow John in his employment when he was transferred to the OESC Central Office in Oklahoma, City. Alice and John were destined to live in Oklahoma City for more than thirty years until they made the decision to move to Owasso, Oklahoma, to be closer to Kay and Donna.    Alice was a member of the Claremore First Baptist Church. She is survived by John, of the home; daughters and their spouses, Kay and Harvey, and Donna and Michael; grandchildren, Jeremy Little and Melissa, Stephen Little and Debbie, Alicia Gunn and David, Julie Clifton and Ricky; great grandchildren, Caleb Little, Olivia Little, Mackenzie Clifton, Tanner Clifton, Addison Clifton, Madison Gunn, Isabella Little, and just-born Noah Little. Alice is also survived by brothers, Douglass Drumb of Bartlesville and Donald Drumb of Norman.     She is preceded in death by her parents, Bill and Thelma Drumb. Crematory services were provided by MMS-Payne Funeral Home and Cremation Service of Claremore, Oklahoma.

Alice passed away in the early morning hours of March 17, 2021. She was 86 years old. Arrangements for cremation have been made. However, there will be no public funeral service, as she had often indicated this desire for her final days on... View Obituary & Service Information

The family of Alice Ann Robinson created this Life Tributes page to make it easy to share your memories.

Send flowers to the Robinson family.