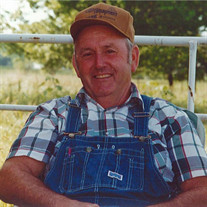 Funeral service for Alvie Welch will be 11:00 a.m., Monday, January 24, 2022 at Miracle of Faith Church, Broken Arrow, Oklahoma, burial will follow at Sweeten Cemetery. Alvie passed away on Tuesday, January 18, 2022. He was 77. Born January 10, 1945 in Wagoner, Oklahoma to Alvie and Gladys Mae (Beatty) Welch, Alvie attended schools in Broken Arrow. Following his schooling, he worked at several different jobs before becoming an over the road truck driver. Later Alvie purchased a backhoe and started his own excavating company. He was a hard worker and could do just about any job that came his way. When time allowed, Alvie enjoyed hunting and fishing. He especially loved spending time with his grand kids, taking them camping and fishing. Alvie dedicated his life to taking care of his family and making sure they had everything they needed. A man of God, he lived his life witnessing to everyone he met. Those family members that survive include his wife Sharon Welch; son Ray Allen Welch; daughter Rhonda Gayle Short; his beloved grandchildren Jennifer Herrera and husband Gabe, Justin Welch and wife Ashley, and Jessica Johnson and husband Josh; great grandchildren Lanie Herrera, Isabella Herrera, Olivia Herrera, Ava Herrera, Scarlet Welch, and Jack Welch. Alvie was preceded in death by his parents and siblings, Connie, Linda, and Joe.

The family of Alvie Welch created this Life Tributes page to make it easy to share your memories.

Send flowers to the Welch family.