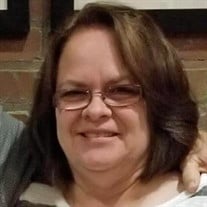 Funeral service for Angela Hayes will be 10:00 a.m. Thursday, August 12, 2021, at Chelsea First Baptist Church. Visitation will be at Chelsea Funeral Home and Cremation Service from 1-8 p.m. Wednesday, August 11, with family receiving friends from 6-8 p.m. Angela passed from this life on Saturday, August 7, 2021. She was 58 years old. The daughter of Larry Bowman and Barbara Plank was born November 16, 1962, in Miami, OK. She attended school in Cache, OK, where she participated in cheerleading, and was the Homecoming Queen. She graduated in 1980 from Owasso High School. In 1978, Angela met Danny Hayes in Winganon. They married on September 5, 1981. They moved to Winganon before building their forever home in Chelsea. Angela worked as a substitute teacher at White Oak School, and was a member of Chelsea PTA. Throughout her life she participated in many activities, such as Girl Scouts, hunting, fishing, traveling, camping in the R.V., and yearly vacations to Roaring River, or to Bennett Springs to fish for trout. She enjoyed looking at Christmas lights each year, and decorating cakes. She was famous for her pecan pie. But most of all, she loved spending time with her family. Angela was preceded in death by her father, Larry Bowman, stepmom Judy, mother, Barbara Plank, stepdad John, and her grandparents Lyle and Edith Bowman. She is survived by her husband Danny, children Kyle and wife Lacee, Dustin, and Dylan and wife Cheyenne; grandchildren Adasyn, Dalton, Tynlee, and Gracyn; and siblings Troy Bowman and wife Janet, Kristi Holmes and husband James, and Kandace Bell, along with numerous nieces, nephews, and extended family members.

The family of Angela Hayes created this Life Tributes page to make it easy to share your memories.

Send flowers to the Hayes family.