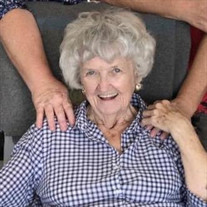 Anita Jean Waters, 85 years and two days, was born September 27, 1936 in Claremore, Ok to Myron E. McGregor and Alice Louise (Story) McGregor. She stepped into Heaven on September 29, 2021 surrounded by family who loved her. She had an older sister, Marcia Ludlum and a younger brother, Michael McGregor. When she was a young girl, her family traveled across the United States, always returning home to Claremore. Anita graduated from Claremore High School with the class of 1954. Anita married Morse Scott Purkey on April 22, 1955. The couple were blessed with three children. In 1969 Anita married Ronnie Ray Waters who had three children. While living for a time in Beggs, Oklahoma, Anita worked for Preigel Real Estate as office manager for more than 20 years. After her retirement, they moved back home to Claremore in 2001. Ronnie passed away not long after their return. Anita was a multi-talented woman who sewed, knitted, crocheted, quilted, and cross stitched many beautiful items for her friends and family. She loved working jigsaw puzzles completing hundreds. She loved Christ and taught Bible Study for many years. She was a wise counselor and often consulted by family and friends for her insightful advice. Her most cherished times were those spent with her children and grandchildren. She is preceded in the death by her parents, her sister, husband Ronnie and step son Brian. She is survived by her three children and two stepsons: Brenda Carpenter and husband David Carpenter, Jennifer Montgomery and husband Dwaine Montgomery, Michael Purkey and wife Jerilyn, Ronnie Waters II, and Andrew Waters and wife Teri. She was blessed with 18 grandchildren, and a house full of great-grandchildren.

Anita Jean Waters, 85 years and two days, was born September 27, 1936 in Claremore, Ok to Myron E. McGregor and Alice Louise (Story) McGregor. She stepped into Heaven on September 29, 2021 surrounded by family who loved her. She had an older... View Obituary & Service Information

The family of Anita Jean Waters created this Life Tributes page to make it easy to share your memories.

Send flowers to the Waters family.