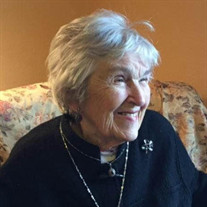 Beloved wife, mother, grandmother and great-grandmother,  Audrey L. Purves passed away peacefully at home surrounded by family, on Saturday evening, July 24, 2021 at 99 years, 1 month and16 days.  Audrey lived a rich and fulfilling life and left an equally wonderful legacy.   Daughter of dairy farmers of Batavia, New York, Herbert and Lela Logan, Audrey was the middle child of siblings, Douglas Logan and Janet Logan Potter.  Audrey enrolled in the Highland Hospital 3 year program and became a registered nurse.  She enlisted in the Army in early 1945, going to Torrance California Hospital to care for WWII casualties of war.  After months of wartime courtship correspondence, she married Charles Grant “Scotty” Purves of the US Army Air Corps on October 5, 1945.  He was a decorated airman of the Pacific theater.  She lost her “Charlie” in 2007 after 63 years of marriage.     After military house-hopping around the country and Puerto Rico, Charlie and Audrey settled in Camp Springs, Maryland, where Charlie was an atmospheric scientist at the US Naval Research Lab, and Audrey worked as a nurse at DC General Hospital, caring for one PVS patient for several years. It was here that they raised their four girls, Janet, Nancy, Susan and Peggy.  Charlie and Audrey became world traveling companions. They attended the 1972 Olympics in Munich Germany, proudly watching daughter Nancy of the Olympic kayak team.  They toured Scotland together, where Charlie’s immigrant parents were from.  They became the faithful supporters and favorite “groupies” of the allegorical evangelical Christian touring production “Toymakers Dream,” produced by son-in-law Tom Newman, meeting up with them around the country to visit their daughter Susan and kids. They even accompanied them to Europe and Russia.  Charlie and Audrey traveled in their “Winnie the Bagel” camper up and down and across the USA, and into Canada, visiting friends and family.  They raised their girls in the Presbyterian Church, Audrey faithfully reading Bible stories to them, and her faith strongly influencing a legacy that has lasted generations.     In 1988, Audrey and Charlie retired to Winterhaven Fl, making their home on a little lake for many years, where they enjoyed watching nature, and hosting friends and family, the Lake Pansy home becoming the favorite family visiting spot, especially for the grandchildren.  They were active in their church and the community, serving as deacons and Audrey singing in the Choir, and volunteering regularly with Meals on Wheels.  They came to Oklahoma in 2004, to live with daughter Janet, because of Charlie's health, and to be near three of their four daughters and many “grands.”    Audrey “never knew a stranger,” and was genuinely interested in people, making them feel important and loved.  She was loved by most anyone who knew her, and “adopted” mom and grandma to many. She was a natural care-giver, opening her home to anyone who was in need, both extended family and friends. Many have been touched by her genuine kindness, generosity and love.  She instilled in her daughters a strong sense of the sanctity of life, caring for the poor, sick, and needy, and passing on her love of “all creatures great and small.” Her adventurous spirit, quick wit, and sense of fun made her a favorite with both grandchildren and great-grandchildren.  She was a devoted wife, mother, chief cook and bottle washer, chauffeur, listener, comforter, talented choir member, homemaker, animal rescuer, and community volunteer, but most of all the kindest, loving mother to her “jewels,” her children, grandchildren and great-grandchildren.   Audrey lived a wonderful and full life and is survived by her daughters, Janet Purves of Leesburg, Florida; Nancy Jones of Sapulpa, Oklahoma; Susan Newman of Bixby, Oklahoma where she spent the remaining year of her life; and Peggy Phillips of Daytona Beach, Florida.  Her grandchildren are Jessica Davenport, Aaron Davenport, Tara Warren, Andrew Mathews, Eric Newman, Jared Newman, Cheryl Barnard, Jordan Newman, Benjamin Allen, Joseph Allen (deceased), Kristin Barnett and Lauren Phillips, as well as 16 great-grandchildren.   A memorial service is planned later in the year to honor her life.

The family of Audrey Purves created this Life Tributes page to make it easy to share your memories.

Send flowers to the Purves family.