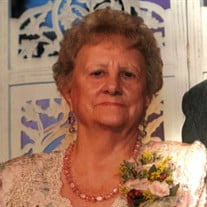 Betty Lou McKinney Mell passed on to be with Jesus on Wednesday, March 9, 2022 while she was sleeping. She was born June 26, 1933 in Ames, Oklahoma. She married Walter F Mell (now deceased) on July 28, 1951 at Eureka Springs, Arkansas. She lived in Tulsa most of her working life, and moved to Inola after she retired. She is preceded in death by her father and mother, Bert Edward McKinney, Emma Lucy Doty McKinney; and siblings Donald L McKinney and Jimmie L McKinney. She is survived by her son and his wife, Walter F Mell, Jr., Marcia Cobb Mell; her grandchildren and spouses, Grace E Mell, Jordan Wacker, Frances R Mell Hope, Jessica Hope, Mark Venzon, John Venzon; and her siblings and families, Freddy G. McKinney (Melba), Bill D McKinney (Carolyn), Dorothy Thompson (W.O.dec.), Alice Carpenter (Kenneth,dec), LaDonna Hutchinson(Ray), Shirley Ragsdale(L.J.dec), Norma Waldrip(Wally,dec.). She worked as an office Manager and Administrator for 34 years for an insurance company through many company mergers/acquisitions. She retired from United Insurance Co. of America on July 7, 1996. She and her husband belonged to three RV camping clubs, where they held various officer positions, helped create new clubs, and traveled to 44 US states. After retirement she visited the remaining states except Vermont and Alaska. She loved to travel and visited 14 foreign countries. She enjoyed catering and put on several wedding receptions for various relatives, and a fiftieth wedding anniversary. She also put on several parties/hospitalities for organizations she belonged to, and worked in the church kitchen during Vacation Bible School. In Tulsa she was a member of a Retiree club, Widows club, and Bunco club. In Inola she was treasurer and on the banquet committee for the Inola Alumni Association for over 10 years. She was on the Inola Library Board, the Inola ESA group for over 10 years, which raised funds for the community. She served as president and planned meals for the local Senor Citizens group. She also was a member of the Inola and Claremore Bunco club. She had many hobbies over the years, sewing for her grandchildren, painting, and being with people. She enjoyed playing cards, board games and computer games. She declared she had a blessed life with a wonderful husband, son, granddaughters, brothers and sisters. We want to thank Robbie and Patty Hutchinson for providing wonderful care for her last 17 months. Viewing will be at the Inola Funeral home, Tuesday March 15 at 310 North Broadway Ave., Inola, OK, from 1:00 to 8:00 PM. The funeral will be held Wednesday March 16 at 2:00 pm at Calvary Baptist Church, 5 South Broadway, Inola, OK.

Betty Lou McKinney Mell passed on to be with Jesus on Wednesday, March 9, 2022 while she was sleeping. She was born June 26, 1933 in Ames, Oklahoma. She married Walter F Mell (now deceased) on July 28, 1951 at Eureka Springs, Arkansas. She... View Obituary & Service Information

The family of Betty Lou Mell created this Life Tributes page to make it easy to share your memories.

Betty Lou McKinney Mell passed on to be with Jesus on Wednesday,...

Send flowers to the Mell family.