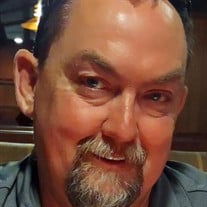 Funeral service for Bradley Patton will be held on Monday, January 10th at 1:00pm at LIfe Changer Church located at 2221 21st St N, Claremore, OK 74017. Burial will follow at Wards Grove Cemetery. Bradley Wayne Patton passed away on December 29th, 2021 in Phoenix, Arizona at the age of 51. The son of Billy Leroy and Pauletta (Lockhart) Patton was born September 13th, 1970 in Pryor, Oklahoma. As a young boy he was raised in the Pryor area. Eventually he would end up attending school in Claremore before moving to Tulsa. There he would attend Nathan Hale High School graduating as a member of the class of 1988. Upon graduating he would begin his working career. However in 1990 Brad decided to enlist into the United States Navy. The highlight of being in the Navy was being baptized in the Jordan River. After his discharge, Brad returned to the Tulsa and Claremore areas. He would meet Tonya Bigger and have two children, Auzlynn and Billy. Over the next several years Brad would work as a pipe fitter and at other mechanical positions while earning his computer certification. He eventually got a job working for Kimberly Clark. This is where he would meet his wife, Sherri. They married on March 12, 2009. Over the next several years they would leave Oklahoma and live in places such as Alabama, Tennessee, Mississippi, and most recently Arizona. In his spare time Brad had many hobbies and past times he enjoyed. He was a hands on guy who loved to tinker. Working in his yard was his favorite thing to do. He took pride that his lawn was always manicured. He also enjoyed playing online poker and teaching his son how to play pool. During football season, you would have caught him watching OU football with his therapy dog Bear. He is preceded in death by his father, Billy Patton. Survivors include his mother, Pauletta England, and her husband, Dennis; his brother, Jeff Patton and step-sisters Teresa, Denise and Anissa. His wife, Sherri Patton; children, Auzlynn and Billy Patton. Step-children, Crystalle Evans, Daniel Whisenhunt, and William Wamego IV; grandchildren, Blaire, Ellie and Miles Evans; Jayden, Ty and Briah Whisenhunt, and Kendra and Liam Wamego. Memorials may be made to Patrick's Pups c/o Wild Heart Ranch at PO Box 170, Foyil, Ok 74031

The family of Bradley Wayne Patton created this Life Tributes page to make it easy to share your memories.

Funeral service for Bradley Patton will be held on Monday, January...

Send flowers to the Patton family.