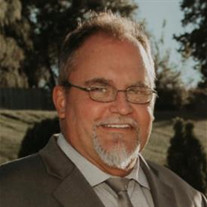 Bryan Gene McCracken was born on October 8, 1964 in Claremore, OK to Beverly (Rosbrugh) Stanley and Billy Gene McCracken Sr. Bryan and his brother Billy McCracken were an inseparable pair growing up, experiencing everything together and Bryan taught his little brother how to do everything. They spent a great deal of time at the Rosbrugh farm, doing what all kids do is get into everything and largely get into trouble. Bryan (with Bill) frequently visited the “switch” tree, sent by their grandmother to resolve any issues they created for the day. Their Rosbrugh grandparents spoiled them both, from ponies, go carts, driving hay trucks, and minibikes. Bryan adored his grandparents and will spend his final resting place near them. Bryan was fearless at sports, and one of the best ways to describe him was he went “full throttle, waiting to hit the turbo button” all the time. He always wanted to go faster, spend time longer, and do it all over again the next day in anything he did. He was a free spirit that was hard to contain. This “go fast” spirit continues in his children today and is one of his hallmark traits. Bryan could do just about anything in sports, which included riding ponies, skateboarding, BMX, baseball, football, hockey, motocross, boating, race car meets, and car shows. If it had gas, he was going to go fast! Bryan lived in many different cities across the United States; Tulsa, St Louis, Dallas, Kennewick, Mesa, and Oklahoma City to name a few. Bryan learned many trade skills. These included plumbing, nursing, and home improvement. He knew his way around a hospital well, and was a great resource when any of us needed help with medical questions or issues. He was always that “stand up guy”, the one that would always be in your corner and would give you help or direction when you needed it. He was always fair with situations and made sure whatever needed to be done was what was right. Bryan passed away peacefully in his sleep on Sunday, December 22nd at home in Oklahoma City. He just moved to Oklahoma City with his fiancé, Donett, to be closer to his children and grand-children. It was his favorite things to do – to go see his grandkids. He brought to them a real grandfather connection, and each one adored him. His grandkids, many who are so very young, may not yet understand he will be missed on their birthdays, Christmas, and summer fun. Bryan is dearly loved and survived by his children: Jennifer (Airick) Wright, Brittney McCracken, Summer McCracken, Derrick Roland, Bryan (Brittney) McCracken, Jr., Dustin McCracken, Jeremiah McCracken and Joshua McCracken, Danielle Roland; his many grandchildren; Chase, Paige, Trenton, Nadia, Adriana, Chelsea, Bentley, Landon, Ayden, Trinity, Brandon, Kinsley, Cameron, Ace and Kaysen; his mother, Beverly Stanley; in-laws, Louise and Sonny Johnson and Don and Paula Freeman; aunts Donna Rosbrugh and Margaret (McCracken) Evans and uncle Earl (Darlene) McCracken; his three brothers, Billy Gene McCracken, Jr; Christopher (Lisa) McCracken and Brandon (Kim) McCracken, Sr.; and several nieces and nephews; Breanna (Tyler) Cantrell, Christopher McCracken, Trevor McCracken, Keri (Taylor) Koppendrayer, John Young, Bryan Young, Sarah McCracken, Nicholas McCracken and Lillette McCracken. Bryan met and fell in love with Donett Freeman, and proposed marriage. He was a romantic always bought her flowers and made little ways for her to discover them. Donett helped him immensely reconnect with his children and support his growing business. Their romance grew over the last year and had strong foundations to begin a marriage. Bryan will be missed by his two Labrador Retrievers, Boomer and Bailey. He was always so proud of them both and talked to them like one of his own small children. Bryan was preceded in death by his grand-parents, Willie and Eunice Rosbrugh, grand-mother Mary Hardesty. Uncles Ted and Gary Rosbrugh. His father, Billy Gene McCracken Sr. and nephew Brandon Gene McCracken, Jr. Memorial donations may be made to www.stjude.org, account #11879396.

Bryan Gene McCracken was born on October 8, 1964 in Claremore, OK to Beverly (Rosbrugh) Stanley and Billy Gene McCracken Sr. Bryan and his brother Billy McCracken were an inseparable pair growing up, experiencing everything together and... View Obituary & Service Information

The family of Bryan Gene McCracken created this Life Tributes page to make it easy to share your memories.

Send flowers to the McCracken family.