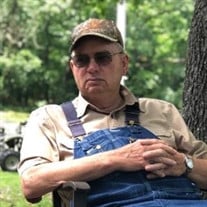 Funeral service for Inola resident Walter "Butch" Martin will be Friday, February 4, 2022, at Inola First Baptist Church. Visitation will be at Inola Funeral Home and Crematory on Sunday, January 30, from 3-5 p.m. Butch passed away at Oklahoma Memory Care in Tulsa on Thursday, January 27, 2022. He was 74 years old. The son of Homer Rowe Martin and Iris Mildred (Rone) Martin Holman was born in Idabel, OK on April 2, 1947. He grew up in Smithville, OK, where he attended and graduated from Smithville High School. He studied diesel mechanics at Okmulgee Tech, and earned his Doctor of Motors degree. Butch met the love of his life, Elizabeth Acker, and the two were wed on June 3, 1967. They moved to Oklahoma City, and also lived in places such as Broken Bow, Okmulgee, and Jenks, before settling in Inola in 1976. This has been home since. Butch and Liz were faithful members of Inola First Baptist Church. In his spare time, Butch enjoyed planting a garden and smoking cheese. He loved to travel back to his hometown of Smithville, to the old homestead on the hill. Most of all, Butch loved people, and especially enjoyed spending time with his children, grandchildren, and great-grandchildren. He was preceded in death by his parents. Survivors include his wife Liz; son, Greg Martin, and his cihldren D.J., Brandon, and Connor; son Jeff Martin and wife Angela, and their children Alicia, Ryan, and Jacob and 4 great grandchildren; god-daughter Melissa Leedy and husband Chris, and their children Zachary and Nicholas, honorary sons Troy Gilmore and Chris Smith; sisters Eleanor Jones, and Nancy Johnson and husband W.D.; and 105 Year old Aunt Ellen Pearson. And multiple nieces and nephews. View and sign Butch's online memorial at www.mmsfuneralhomes.com.

Funeral service for Inola resident Walter "Butch" Martin will be Friday, February 4, 2022, at Inola First Baptist Church. Visitation will be at Inola Funeral Home and Crematory on Sunday, January 30, from 3-5 p.m. Butch passed away at Oklahoma... View Obituary & Service Information

The family of Butch Martin created this Life Tributes page to make it easy to share your memories.

Send flowers to the Martin family.