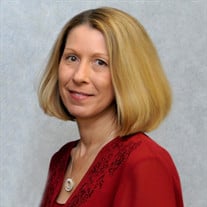 Funeral service for Candy Cummings will be held 11:00 a.m, Saturday, April 4, 2020 at the MMS-Payne Funeral Home Chapel. Burial will follow at Woodlawn Cemetery. Candy Cummings passed away on March 31, 2020 at the age of 61. The daughter of Robert and Elaine Budde was born January 28, 1959 in Newton, Kansas.  After spending her early childhood in Kansas, her family moved to Claremore. Candy attended Claremore High School, graduating in the class of 1977. After graduation Candy married her high school sweetheart, Mike Winton, and remained in the Claremore area.   The couple had two children, B.J Winton and Lindsay Winton. After the tragic passing of her husband Mike in 1986, Candy became the sole provider for her two children.  Candy again found love when she met and began dating John Cummings, a Claremore Police Officer. The two married on June 15, 1989, in Gainesville, Florida. Candy had an incredible work ethic. In the early years she worked for a time as a bookkeeper before taking a job at the Price Law Firm  After several years Candy was hired as a court bailiff at the Rogers County Courthouse, working in the office of District Judge Jack Mayberry until his retirement. She then began working in the office of District Judge Sheila Condren for the past seventeen years. Candy enjoyed cooking, spending time with her family, and especially spending time with her grandchildren who referred to her as “GRAMY”. Candy and John traveled frequently, and in the most recent years loved going on cruises with the family. Candy and John lived the past fifteen years on a small ranch north of town and raised cattle. Just last year they sold the ranch and built a new home in Claremore to allow more time for travel and spending quality time with her loving family. Those who knew her well could count on Candy to be a loyal and true friend, and she especially enjoyed her strong friendships with many of her co-workers, past and present, who would meet on a regular basis for lunches for many years. Candy called these friends her courthouse family, and they were treasured friends. She is preceded in death by her mother, Elaine Budde. Survivors include her father, Robert Budde and wife Jean;  husband, John Cummings; children, Budde "B.J." Winton and wife Liz, Lindsay Gatrell and husband Gavin, Jarrod Cummings and wife Jennifer, and Drew Cummings and wife Katy; grandchildren, Lainee, Brady, and Brynli Winton, Ava, Gavin Jr, Gunner, and Addilyn Gatrell, Conner Linam, Kennedy and  Blakelee Cummings, and Ella and Harper Cummings; brothers, Bryson, Bruce and wife Pam, and Brett Budde, along with many other extended family and friends.

Funeral service for Candy Cummings will be held 11:00 a.m, Saturday, April 4, 2020 at the MMS-Payne Funeral Home Chapel. Burial will follow at Woodlawn Cemetery. Candy Cummings passed away on March 31, 2020 at the age of 61. The daughter... View Obituary & Service Information

The family of Candy Cummings created this Life Tributes page to make it easy to share your memories.

Funeral service for Candy Cummings will be held 11:00 a.m, Saturday,...

Send flowers to the Cummings family.