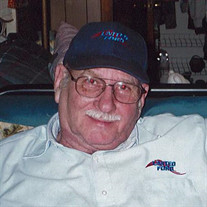 Service for Carl Walter Morgan will be 2:00 p.m., Tuesday, May 28, 2019 at MMS-Payne Funeral Home Chapel. Carl passed away on May 22, 2019, with his wife Marilyn by his side, following a long battle with cancer. Born February 24, 1933 in Topeka, Kansas, to Raleigh and Violet Florence (Martin) Morgan, Carl was educated in Emporia, Kansas. He proudly served his country with the U.S. Army. Carl eventually landed a job as a parts manager with Ford. He worked in parts until his retirement in 1998. He went back to Ford in 1999 and worked as a shuttle driver, retiring again in 2007. Carl was involved with many Veteran's organizations, Skiatook VFW and the Skiatook American Legion, to name a few. Carl's large personality and big smile made him fun to be around. He loved tell jokes and pull pranks any chance he could. He loved his family and took great care of them. He was liked by the people he worked with. Carl attended church and he loved the Lord. Those who preceded him in death are his parents, sons David Quinton and Donnie Quinton, and great granddaughter Mackenzie Payne, 3 brothers and their wives, 1 sister and her husband, and son-in-law John McConnell. Those who survive include his wife Marilyn of 42 1/2 years; sons Carl Morgan, Jr. and wife Terry, Clay Morgan and wife Robin, daughter Linda McConnell, son Eddie Quinton and wife Rhonda, daughter Betty Payne and husband Charlie, and son Doug Quinton and wife Brenda; 13 grandchildren; many great grandchildren, nieces and nephews and other extended family. Those who wish to honor Carl's name with a memorial contribution may do so by contributing to either Cancer Treatment Centers of America Needy Fund at 10109 East 79th Street, Tulsa, Oklahoma 74133, or Good Shepard Hospice, 4343 South 118th East Avenue, Suite 160, Tulsa, Oklahoma 74146. The family would like to thank Cancer Treatment Center, Good Shepherd Hospice, and Devine Home Health for going above and beyond in their care for Carl.

The family of Carl Walter Morgan created this Life Tributes page to make it easy to share your memories.

Send flowers to the Morgan family.