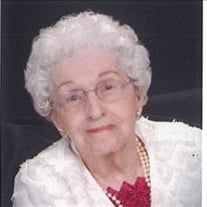 Carrie Mabel Bennett was born on June 19, 1922 to Iris Irene and John Adda Powers. Her birthplace was 4 ½ miles north of Claremore on a 240-acre farm in Sageeyah. She was welcomed by her 5-year-old brother Harry. She attended a one -room school from 1st- 8th grade. She then transferred to Claremore High school. While in high school, she was a chorus girl for the opening of the Will Rogers Memorial Folly Celebration. She graduated in 1940. Mabel married Dr. Robert Bennett on September 19, 1940, and they were married 62 years until his death in 2002. They have three daughters: Gail, Donna, and Barbara. She was a stay at home mother until the girls went to school. Mabel then worked at the Bennett Bathhouse as the secretary. She also worked at Wilson Hardware and Fidelity Savings & Loan Assoc., from which she retired at the age of 62 in 1984. Mabel enjoyed making her girls clothes, and their dolls clothes, when they were growing up. She was a homeroom mother for many years and made sure they were always well taken care of. She enjoyed lunches with her friends and making crafts of all kinds, which included making beautiful quilts and painting pottery. She made lots of items for her family and church bazaars. Mabel was a member of First Christian Church in Claremore for 80 years. She was very active in the Disciples Women’s Group. After retirement Mabel took Jazz Dance lessons with her friends and granddaughter Robyn, and performed in a couple of recitals when she was in her 70s. She enjoyed spending more time with her grandchildren, her great-grandchildren, and her great-great-grandchildren. Mabel’s home was a place to gather for holidays and she enjoyed preparing food for her family. Mabel didn't think twice about opening her home and heart to whomever needed a place to stay. She is preceded in death by her husband Robert, parents John and Irene Powers, her brother Harry Powers, her parents-in-law Minnie and Mose Bennett, sons-in-law Hal Henson and Bill Strickland, and grandson Robbie Ellison. She is survived by her daughters: Gail Mullen and husband Don, Donna Henson, and Barbara Strickland; her grandchildren: Carrie Eubanks, Robyn Foxworth, Ronda Gonzalez, Alan Strickland, Shari Burns, Scott Mullen, and John Mullen. She has 17+ great-grandchildren and 18+ great-great-grand children and many nieces and nephews. Mabel was a loving, caring, friendly, positive, and encouraging woman throughout her life. She lived in Claremore Nursing Home the last few years, made many friends there, and considered the staff family. Mabel always had a smile for everyone and believed in living life according to 1 Corinthians 13. Friends may visit at the funeral home on Monday, April 27, 2020 from 9:00am – 10:00am, a celebration of life will be held at a later date. In Lieu of flowers, the family has asked for donations to the First Christian Church Disciples Women’s Group.

Carrie Mabel Bennett was born on June 19, 1922 to Iris Irene and John Adda Powers. Her birthplace was 4 ½ miles north of Claremore on a 240-acre farm in Sageeyah. She was welcomed by her 5-year-old brother Harry. She attended a one -room school... View Obituary & Service Information

The family of Carrie Mabel Bennett created this Life Tributes page to make it easy to share your memories.

Send flowers to the Bennett family.