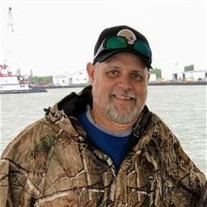 Memorial service for Cecil Verlin Charles will be 10:00 a.m., Monday, January 20, 2020 at MMS-Payne Funeral Home Chapel. Cecil passed away on Tuesday, January 14, 2020. He was 58. Born May 11, 1961 in Vinita, Oklahoma, to JD and Cora Mae (Livingston) Charles, Cecil attended schools first in Schulter, Oklahoma and then Claremore. He graduated with the class of 1980. Following his education, Cecil began working for Durability where he constructed custom cabinets for various business. When they closed, he went to work for Amarillo Custom Fixtures where they made fixtures for different convenience stores. When Cecil wasn't hard at work, he enjoyed hunting and fishing. A huge fan of the OU Sooners and the Pittsburgh Steelers, Cecil made sure he was cheering them to victory each time they played. He was most happy spending time with his children and grandchildren. Cecil also enjoyed watching old movies, westerns and old scary shows. He knew how to have a good time, even if it was giving someone he loved a hard time. Those family members that survive include his children Thomas Charles, Emilee Charles, Kimberlee Charles, Vicki Kistler and husband Daniel, and Jake Darnell and wife Cherish; his father JD Charles; his grandchildren Anthony, Elyana, Arlo, Rylee, Myranda, Jacee, Kingston, Ashton, Peyton, and Lexington; his brother Donald Charles and wife Janie; sister Teresa Dorsey and husband Randy and many nieces and nephews. Cecil was preceded in death by his mother Cora Charles and his sister Brenda Charles. View and sign Cecil's online tribute at www.mmsfuneralhomes.com

The family of Cecil Verlin Charles created this Life Tributes page to make it easy to share your memories.

Send flowers to the Charles family.