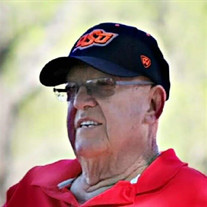 Funeral service for Chelsea resident, Charles Henry Conlin will be 11:00 am Tuesday, January 7, 2020, at First Baptist Church of Chelsea. Burial will follow at Dawes Cemetery under the direction of Chelsea Funeral Home and Cremation Service. Visitation will be at the funeral home from 1-8 pm on Monday, January 6, with family receiving friends from 6-8 pm. The son of Charles Walter Conlin and Maymie Hazel (Poff) Adkins was born April 9, 1937, in Manchester, Tennessee. He moved to Detroit, Michigan at the age of 15, and joined the US Army. After his discharge he returned to Detroit, where he worked for Chrysler for the next seven years. Eventually, he moved to Big Cabin in the 1970's, where he started a dairy farm and became a member of the Laborer's International Union of America. In the late 1970's, he met Beverly Sue at a VFW dance. They were married in Miami, Oklahoma on January 5, 1982. Later they moved to Prairie Village, Kansas, where Charles continued working with the LIUNA, participating in the construction of many large buildings around the Kansas City area. After retirement, Charles and Sue returned to Oklahoma, settling in the Chelsea area. In his spare time, Charles followed many pursuits. He enjoyed fishing, bowling, gardening, and raising cattle. He also enjoyed watching horses, especially Tennessee Walkers and draft horses. He loved visiting with people in general, and his family members in particular. Trips to visit family in Tennessee were always a good time. Charles is survived by his wife Sue; children Charlinda Robinson and husband Steve, Danny Stephenson, and David Stephenson and wife Rhonda; seven grandchildren; and ten great-grandchildren; He is preceded in death by parents Maymie Poff Adkins and Charles Walter Conlin; and brothers Windell and J.W. Conlin. View and sign Charles' online memorial at www.mmsfuneralhomes.com.

Funeral service for Chelsea resident, Charles Henry Conlin will be 11:00 am Tuesday, January 7, 2020, at First Baptist Church of Chelsea. Burial will follow at Dawes Cemetery under the direction of Chelsea Funeral Home and Cremation Service.... View Obituary & Service Information

The family of Charles Henry Conlin created this Life Tributes page to make it easy to share your memories.

Send flowers to the Conlin family.