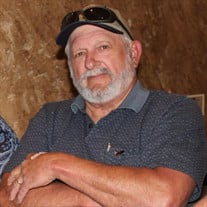 Graveside service for Charles Weldon Foster, or as many referred to him, "Charlie" will be 10:00 a.m. Wednesday, September 22, 2021, at Washington Cemetery, under the direction of MMS-Payne Funeral Home and Cremation Service. Charlie passed away September 18th, 2021, , at the age of 73. The son of the late Weldon Foster and Grace (Schweizerhof) Foster was born on June 27, 1948 in Kingsville, Texas. He graduated from Delaware High School in 1966. In July, 1977, he met his wife, Kathy Duvall, and the two were married on December 3, 1977. The job that Charlie enjoyed the most was working at Sequoyah Public Schools. He loved being around the kids, and always had gum or Jolly Ranchers to hand out. He taught 5th grade Sunday School class for many years, and every Sunday he gave the kids Jolly Ranchers. Even when those kids were adults, they would still ask him if he had any Jolly Ranchers. In his spare time he enjoyed taking care of his cattle. He was very proud of his children and grandchildren. One of his favorite things to do was watch them play sports, and he always had an encouraging word. When he would watch the boys play football, you always knew he would be standing in his spot along the fence. His favorite sports teams were the Chicago Cubs, Houston Astros, and Sequoyah Eagles. Charlie was preceded in death by his father Weldon Foster. He is survived by his wife Kathy Foster; his mother Grace Foster; sons Brad Foster and Travis Foster; daughter Christy Dunfee and husband Will; grandchildren Alex and husband Chris, McKaine and wife Lex, Grayson and Alexi, Jagger, Lexi, Christina, and Brianna; great-grandchildren Everly, Nolan, and Bentley; and brother Jim Foster and wife Lenora, along with many nieces and nephews. View and sign Charlie's online memorial at www.mmsfuneralhomes.com.

Graveside service for Charles Weldon Foster, or as many referred to him, "Charlie" will be 10:00 a.m. Wednesday, September 22, 2021, at Washington Cemetery, under the direction of MMS-Payne Funeral Home and Cremation Service. Charlie passed... View Obituary & Service Information

The family of Charles Weldon Foster created this Life Tributes page to make it easy to share your memories.

Graveside service for Charles Weldon Foster, or as many referred...

Send flowers to the Foster family.