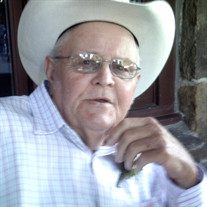 Funeral service for Alluwe resident, Charles Parker, will be 11:00 am Monday, September 30, 2019, at Living Word Church in Nowata. Burial will follow in Memorial Cemetery in Nowata under the direction of Chelsea Funeral Home and Cremation Service. Visitation will be at the funeral home on Sunday, September 29, 2019, from 1-6 pm, with family greeting friends from 4-6 pm. . Charles passed away at his home in Alluwe on Thursday, September 26, 2019. He was 75 years old. The son of David Alden Parker and Katherine Eudora (Brashears) Parker was born March 3, 1944, in Chelsea, Oklahoma. He grew up and attended school in Alluwe, graduating in 1962 . In high school, he met the love of his life, Barbara McClellan. They were married the day after she graduated, on May 14, 1964. Charles began his working career working for Nowata County. Later, the family moved to Tulsa, where he began working for Patterson steel, helping to construct the ORU Prayer Tower. In the early 1970's, the family moved back to Alluwe, where they purchased the Parker family homestead. Charles was never a person to shy away from working. In fact after he returned home to Alluwe, he returned to farming. This however was always done in conjunction with other jobs. Jobs such as Peabody Coal, P & G Coal, and Go-Cat Coal Company. Later he helped establish P & D Fabrication in Nowata, where they built oil field tanks. Lastly he was appointed Nowata District 1 County Commissioner, and held that position for 20 years before retiring in 2010. In his spare time Charles also had many past times and hobbies he enjoyed. He served as a deacon and song leader at Fairview Baptist Church. He loved woodworking, raising cattle, and growing huge gardens. He loved being an auctioneer, helping do many estate auctions. However being with his family was his true love. He always looked forward to seeing them, mostly so he would have somebody to tease. Charles was preceded in death by his parents, David Alden and Katherine Parker. Survivors include his wife Barbara, his daughters, Kimberly Ann McGee and husband Tim, Lisa "JoJo" Johnson and husband William, Sandy Kincade and husband Lee, and Debbie Parker and significant other Travis Fate; grandchildren, Emily, Matthew, Sean, Chelsea, Olivia, Wyatt, Kameron, Tyler, Shea, Hunter, Ryle, Victoria, Dalton, Courtney, and Cameron; nine great-grandchildren, with one more due in November; and sister, Ruth Ann Wilkinson. View and sign Charles's online memorial at www.mmsfuneralhomes.com

Funeral service for Alluwe resident, Charles Parker, will be 11:00 am Monday, September 30, 2019, at Living Word Church in Nowata. Burial will follow in Memorial Cemetery in Nowata under the direction of Chelsea Funeral Home and Cremation Service.... View Obituary & Service Information

The family of Charles Lee Parker created this Life Tributes page to make it easy to share your memories.

Funeral service for Alluwe resident, Charles Parker, will be...

Send flowers to the Parker family.