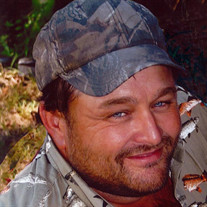 Funeral service for Samuel "Chet" Armbrister will be 10:00 am Friday, October 25, 2019, at Washington Baptist Church, Claremore, Oklahoma. Burial will follow in Washington Cemetery. Visitation will be at MMS-Payne Funeral Home on Thursday, October 24, from 1-8 pm, with family greeting friends from 5-8 pm. Samuel Chet Armbrister passed away at his home on October 20, 2019. He was 49 years old. He was born December 2, 1969, in Claremore, to Donnie Lewis and Patricia Ann (Attaway) Armbrister. Chet is a graduate of the Claremore High School class of 1988. Claremore has been his lifelong home. Chet began working at the age of twelve for his father in the business that he started, Rogers County Fence Company. Later, Chet and his mother became the business owners. On December 14, 1997, Chet and Jackie Littlefield Taylor took vows of unity in the eyes of the Lord. He instantly became a step-dad to Alesha and Jessica, who he claimed as his own. He didn't take this new role lightly, for he knew there would be bumps along the way, as they tried to blend their families. Growing up, Chet and his family served the Lord and attended church faithfully. He continued his faith and worshiped with his wife and family at the church near their home, Washington Baptist Church. Though he may not have been there every Sunday, his heart was still worshiping the Lord from his fields. Chet and Jackie were given the opportunity to purchase Jackie's family farm in the Sequoyah area. Chet had found a place where his soul was free, and that brought him peace at the end of the day. He and Jackie would end up with 101 acres that they worked together until his last days. Chet made gardens and grew some of the best local produce. He became known for the best tasting tomatoes in the Claremore area. Being in those gardens and sharing the fruit of his labor was very pleasing to him. He was also an avid hunter and fisherman, loving the great outdoors. But the title that he loved most was given to him on May 19, 2017, when Jett Wayne was born, and Chet became "Papaw". Chet was preceded in death by his father, Donnie Lewis Armbrister, father-in-law, Richard Littlefield. Those family members that survive include his wife, Jackie of the home, his daughters Alesha Dorsey and husband Joe, and Jessica Taylor, all of Claremore; his pride and joy grandson, Jett Dorsey; his mother Patricia Armbrister; siblings Jeff Armbrister and wife Karen, and Pam Armbrister; mother-in-law Patricia Littlefield; brother-and sister-in-law Danny and Cindy Littlefield; nieces and nephews Luke Armbrister and wife Keysha, Samantha Matthews and husband Keith, Celeste Osborne and husband Ethan, Michael Wilson, and Ashley Cummings and husband David; great-nieces and -nephews Chevy Matthews, Gunnar Osborne, Rowdy Osborne, Oakley Matthews, Scout Osborne, Honey Matthews, Maddie Cummings, and Olivia Cummings. View and sign Chet's online memorial at www.mmsfuneralhomes.com.

The family of Chet Armbrister created this Life Tributes page to make it easy to share your memories.

Funeral service for Samuel &quot;Chet&quot; Armbrister will be 10:00 am...

Send flowers to the Armbrister family.