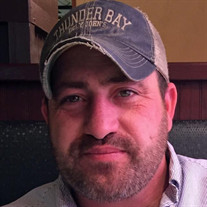 Funeral service for Inola resident Cory Sean Robertson will be10:00 a.m. Tuesday, November 23, at Inola First Baptist Church. Burial will follow at Oakhaven Cemetery. Visitation will be 1-7 p.m. on Monday, November 22, at Inola Funeral Home and Crematory. Family will greet friends from 5-7 p.m. Cory was called to his heavenly home in Tulsa on Thursday, November 18, 2021. He was 47 years old. The son of Lesily Robertson and Leigh Ann (Dennison) Fredrick was born in Denton, TX on November 13, 1974. As a young child, he lived with his family for a time in Gainesville, TX. Later he attended Claremore High School. Cory's working years included a few different careers. He worked as a machinist, a Fiber Optic inspector, and also as a truck driver for UPS, a job which he held for fourteen years. Through a mutual friend, he was introduced to Shelly Keeling Sinor, and the two were married in 2002. In his spare time, Cory followed many pursuits. He loved riding or driving anything fast, including motorcycles, boats, or cars. He enjoyed spending time at the lake, fishing or pulling the kids on a wakeboard. He also liked to shoot guns. By far his favorite pastime was spending time with his children and grandchildren. Cory is preceded in death by his father, Lesley Robertson, and his daughter, Darian Robertson. Survivors include his wife Shelly; mother Leigh Fredrick; uncle Chris Dennison; brother Ryan Robertson; sister Sarah Stockinger; daughter Channing Sinor, sons Warren Sinor, Chase Robertson, Parker Robertson, and Brennan Robertson; grandchildren Keaton Robertson, Jaxyn Robertson, and Aurora Wilkens; as well as many friends and extended family members. View and sign Cory's online memorial at www.mmsfuneralhomes.com.

The family of Cory Sean Robertson created this Life Tributes page to make it easy to share your memories.

Funeral service for Inola resident Cory Sean Robertson will be10:00...

Send flowers to the Robertson family.