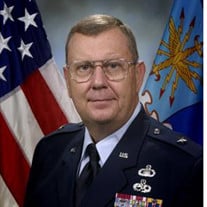 David Stephen Angle passed away on Wednesday, March 27, 2019 at the age of 71. David, the son of Robert and Phyllis Keck Angle, was born March 3rd, 1948 in St. Joseph, Missouri.He graduated Benton High School in St. Joseph in 1966. He married Kathy McGlothlin, who also attended Benton, on April 6, 1968. Their time as newlyweds was short-lived, as David had joined the United States Air Force, and was deployed overseas on his first active duty assignment. After two years of overseas deployment, David was assigned to Altus Air Force Base in Oklahoma to complete the two remaining years of his active duty service. After discharge, he returned to St. Joseph and began working for the United States Post Office. In 1974, David accepted a full-time position with the Missouri Air National Guard. He served in the Guard the remainder of his career. He served in the Missouri Air National Guard from 1974 to 1984, where he was commissioned as a Second Lieutenant. He transferred to the Oklahoma National Guard in 1984, serving in the 138th Fighter Wing in Tulsa, OK and the 137th Airlift Wing in Oklahoma City, OK. David earned a number of major awards and decorations in his career, obtaining the rank of Brigadier General in November of 2005. David had the unique distinction of being assigned as a Vice Wing Commander at both the 138th Fighter Wing and 137th Airlift Wing, before being assigned as Assistant Adjutant General, Joint Force Headquarters, Oklahoma Military Department, Oklahoma City, Oklahoma. David prided himself in the way he served his fellow servicemen. David retired from the Guard November, 2007. David loved spending time boating and fishing with his family and friends. He eventually purchased a lake property in Grove, OK, where he and Kathy built their first lake house in 1990. David and Kathy enjoyed traveling. They frequented Branson, MO, Arizona, and Colorado. Family was always a huge part of his focus, and he loved spending time with them. Nothing brought him more joy than time with his grandchildren. He is preceded in death by his parents, Robert and Phyllis Angle. Survivors include his wife Kathy of the Home; daughter, Stephanie Angle-Walls and husband Herb of Parkville, Missouri; son, Stephen Angle and Lori Hampton of Claremore; grandchildren, William David Walls, and Paige Angle; brother, Terry Angle and wife Evangeline; along with numerous extended family and military family.

The family of David Stephen Angle created this Life Tributes page to make it easy to share your memories.

Send flowers to the Angle family.