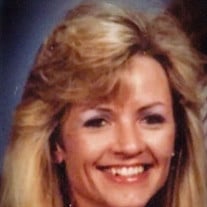 Deborah (Gailey) McMains, 63, passed away unexpectedly on August 8, 2019. She was born as Deborah Lynn Gailey on June 16, 1956, in Huntington Beach, California, to Lorraine (Johnson) Gailey and Clifford Gailey. Deborah received her education at Alluwe Public Schools, graduating in 1974. She also took courses at NEO Community College in Miami, OK, while working part time. Deborah met and married Mr. Gary McMains in 1976, and resided on a farm in rural Nowata. She became a step-mom to his two oldest children, and also later had two children of her own. She was a stay-at-home mom who gardened and helped with other work on the farm. In her spare time, Deborah enjoyed going to the lake, water skiing, playing co-ed softball, music and dancing, and walking. Most of all, she treasured time spent with grandchildren, family, and friends. Once her children were raised, she worked for a short time for the John Deere company in Ohio, and for Amazon in Coffeyville, Kansas. Deborah and her husband eventually parted ways and she moved back to Nowata, where she last worked at the Hays House. Deborah was known for being silly and fun-loving with a will to make others laugh. She was loved by many and will truly be missed by those who knew her. Deborah leaves behind two children, Stephanie McMains and husband Clayton Sanders, and Kevin McMains and wife Julia; two step-children, Ginger (McMains) Albert and husband Larry, and Carey (McMains) Sprinkel and husband Lance; siblings, Gloria Wall and husband Jim, Janice Dawson and husband Rick, Marilyn Holtman and husband George, Steven Gailey and wife Debbie, Dwayne Ridenhour and wife Gloria, Dale Ridenhour and wife Rhonda, and Greg Ridenhour and wife Kathy; grandchildren, Amber (Albert) Winkelman, Chelsea (Perryman) Hill, John Albert, Katie Sanders, and Langston Sanders. Deborah is preceded in death by her father, Clifford Gailey, her mother Lorraine Ridenhour and step-father Harvey Ridenhour, and siblings Doris McKinney, Diane McKinney, Norma Lafremier, and Darwin Ridenhour. Memorial service for Deborah will be 10:00 am Saturday, August 17, 2019, at Delaware First Baptist Church, officiated by John McKinney. Cremation arrangements are under the care of Chelsea Funeral Home and Cremation Service.

The family of Deborah McMains created this Life Tributes page to make it easy to share your memories.

Send flowers to the McMains family.