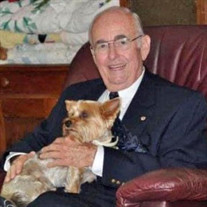 Services for Don Hill will be held 10:00 a.m. Saturday, August 29, 2020 at the Pavilion at the First United Methodist Church of Claremore.  Burial will follow at Woodlawn Cemetery.  Visitation will be held on Friday, August 28, 2020 from 5-8 p.m. at the MMS-Payne Funeral Home. Donald Roy Hill passed away on Monday, August 24th, 2020 at the age of 86. The son of Norman and Inez (Harris), Hill was born on July 31, 1934 in Chickasha, Oklahoma.  As young boy his parents would move to Oklahoma City and there he would begin attending school.  During his high school years Don attended Oklahoma Military Academy in Claremore.  He graduated from OMA in the high school class of 1952.  With a desire to continue his education, Don stayed at OMA and received his associate’s degree.  Upon completion Don joined the United States Army.  After his discharge Don returned to Oklahoma City.  On a visit to Claremore he would meet Barbara Conrow.  The two began dating and married on January 31, 1959.  The newlywed couple made their home in Claremore and Don began his long career as a car salesman.  He began with Robinson Ford and retired from Jack Kissee Ford in 2002. During his life in Claremore Don was an active part of the community.  He was active in the First Presbyterian Church, where he served as an elder.  He served in many civic organizations such as the Masonic Lodge, Elks, Lyons Club, Claremore Quarterback Club, The Claremore Industrial Authority and served on the board of directors for the J.M. Davis Gun Museum.  Don also loved participating in politics, helping many of our local politicians.  In his spare time Don had many hobbies and past times he enjoyed.  He loved hunting especially quail, duck and pheasant. He enjoyed traveling to the mountains to ski, and to the beaches of Florida and Alabama. OSU Cowboy football was always at the top of his favorite things to do list as well.  He was a season ticket holder for many years and enjoyed traveling with friends to OSU bowl games.  However, nothing made Don as happy as his family.  Spending time with his children and grandchildren is what made him the happiest. He is preceded in death by his parents Norman and Inez; wife Barbara, and son David Hill. Survivors include his sister Cynthia McVicar and husband Ron, daughters, Donna Sharp and husband Pat, Debbie Stephens and husband Kerry, Dani Freeman and husband Billy, and Jami Hill-Smith and husband Lance. His grandchildren include, Jeremy Hill and wife Jody, Colton Hill, Zac Coplon, Shelby Schisler and husband Joel, Alex Coplon, Kara Stephens and wife Sam, Kyle Stephens, Katie Duncan and husband Scott, and Luke Stephens, Hunter Freeman and Brody Freeman and Sunshine Smith and Benji Smith. In addition, his great-grandchildren, Morgan Rudd and husband Logan, Gunnar Hill, Grayton and Robbie Coplon, and Rhett and Emmett Duncan and numerous nieces and nephews. Memorials may be made to the Oklahoma Military Academy Alumni Association. 1701 West Will Rogers Blv., Claremore, OK 74017

Services for Don Hill will be held 10:00 a.m. Saturday, August 29, 2020 at the Pavilion at the First United Methodist Church of Claremore.  Burial will follow at Woodlawn Cemetery.  Visitation will be held on Friday, August 28, 2020 from 5-8... View Obituary & Service Information

The family of Donald Roy Hill created this Life Tributes page to make it easy to share your memories.

Send flowers to the Hill family.