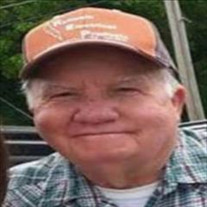 Edward "Eddie" Harrison Bears was born on January 22, 1932 in Catoosa, Oklahoma to parents Edward Tony Bears and Ophelia Opal "Porter" Bears. Eddie was the eldest of five children including Jim Bob, Elsie, Virginia, and Frank. Eddie passed from this life on Sunday July 26, 2020 at the age of 88 years, 6 months & 4 days. He was preceded in death by his parents Edward & Ophelia Bears, siblings Elsie, Virginia, and Frank, and one son, Steve Bears. Eddie was raised in Catoosa and attended Catoosa Public Schools. After graduation he attended Connors State College. During his school years he was a caddie at the Rolling Hills golf course. After college he gained employment with Spartan and married Wanda Mae Barbee. Two sons were born from this union, Steven Grady Bears and Mark Edward Bears. He started work at McDonnell Douglas as a mechanic. The family moved to a small farm in Verdigris, OK, where Eddie and his sons enjoyed the simple life of raising hogs, rabbits, cows, and chickens. But he loved going fishing and watching his boys ride horses. In 1964 they built a new family home and moved to Claremore, OK. In approximately 1964 Eddie became a member of the Catoosa Masonic Lodge #185. He was a 32nd Degree Master Mason. That same year (1964), Eddie began his career as a Special Deputy with the Rogers County Sherriff's Office. Eddie was well known in the law enforcement community and considered them family. He transported hundreds of inmates from Rogers County to correctional facilities all over the state, often by himself. He loved meeting people and visiting the ladies in the Records Department, where they all knew him by name. He has been described as a sweet, friendly and humble man. Eddie was proud to have two sons (Steve and Mark) who joined the law enforcement family as security officers with the Department of Corrections. He served 40 years as a Deputy until his retirement in 2004. Eddie had a big heart and wanted to share his home. So in 1981 he adopted his son Larry Edward Bears. During this time he was a great father figure to Rosalene Phillips, Sarah Froman, and Ellen Prewitt. In 1989 his grandson Casey Joe Kirkland came to live with him. After his retirement from McDonell Douglas and having two more boys at home, Eddie went to work at Catoosa Public Schools in 1985. Eddie is survived by one brother, Jim Bob and wife Ree Bears of Orange California, son Mark and wife Mary Susan Bears of Hominy Ok, son Larry Bears of Tulsa Ok, grandchildren Leslie Bears, Sydney Bears, Casey Kirkland and wife Summer, Tracy and husband Scott Urban, and Stacey and husband Michael Lewis. Great-grandchildren Kayleann, Loralei, Kennedi, Olivia, Makala and Jordan. And many nieces, nephews, cousins, and friends. Anyone who knew Eddie knew that for him the greatest joys and achievements of his life would have been his sons and grandchildren. The two words that made him beam were "Father" and "Grand-dad." He talked to his boys several times a week. Always beginning the conversation with "Hello Son" and hearing "Hello Father." Words cannot express the joy his life brought us or the enormous void we now feel. Eddie knew the greatest gift in life was not what you have, but what you give. Not a day will go by that we won't think of you. But we will find comfort in knowing that you'll be watching over us, forever guiding us along our journey of life. Grand-dad just know that you were and ARE forever loved. View and sign Eddie's online memorial at www.mmsfuneralhomes.com.

The family of Edward Harrison Bears created this Life Tributes page to make it easy to share your memories.

Send flowers to the Bears family.