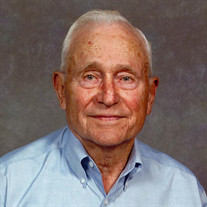 Graveside service for Horace Leroy (H.L.) Santee will be 11:30 am on Wednesday, April 17, 2019, at Chelsea Cemetery, under the direction of Chelsea Funeral Home and Cremation Service. Visitation will be at the funeral home on Tuesday, April 16 from 2-4 pm, and on Wednesday, April 17 from 9-11 am. H.L. Santee was born October 18, 1922, on a farm north of Chelsea, Oklahoma. He died on Tuesday, April 9, 2019 in Broken Arrow, Oklahoma, at the age of 96 years. He was preceded in death by his father Glen Santee, his mother Gertrude (Moore) Santee, both of Chelsea, his wife Helen, his older sister Doris Lee Ellis, and his daughter Peggy Ann Young. He is survived by his younger sister C. Patricia Williams of Vinita, Oklahoma; son Tommy Santee and wife Sue of Monett, Missouri; daughter Kathy Reed and husband Danny of Broken Arrow; son-in-law Bill Young of Owasso; seven grandchildren; and fifteen great-grandchildren. After graduating from Chelsea High School in 1939, H.L. attended HYA Machinist training in Muskogee, Oklahoma from August, 1941 to January, 1942. He then went to Hartford, Connecticut to work for several months. He married Helen Louise Martin in 1943. He spent the next 31 years working in and managing machine shops in the Tulsa area. In 1973, he retired to his cattle ranch in Craig County, north of Chelsea. H.L. was active in leadership roles at Tulsa Parkland Baptist Church for twenty years, and then attended First Baptist Church of Chelsea. The family suggests contributions may be made in H.L.'s memory to the Chelsea Senior Citizen Center, 618 Pine St., Chelsea, OK, 74016. View and sign H.L.'s online memorial at www.mmsfuneralhomes.com.

Graveside service for Horace Leroy (H.L.) Santee will be 11:30 am on Wednesday, April 17, 2019, at Chelsea Cemetery, under the direction of Chelsea Funeral Home and Cremation Service. Visitation will be at the funeral home on Tuesday, April... View Obituary & Service Information

The family of H. L. Santee created this Life Tributes page to make it easy to share your memories.

Send flowers to the Santee family.