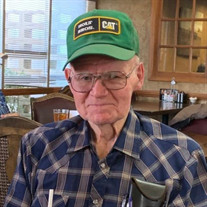 Funeral service for Harley Otis Holt will be 11:30 a.m., Friday, October 1, 2021 at MMS-Payne Funeral Home Chapel, burial will follow at Fairview Cemetery. Friends may visit at the funeral home on Thursday, September 30 from 3pm-8pm, with family receiving visitors from 6pm-8pm, Harley passed away at his home on Tuesday, September 28, 2021. He was 89. Harley Otis Holt was born to Orvill and Melvina Holt on July 22, 1932 in Inola, Oklahoma. As a young boy his family moved to California during the dust bowl and he often described those times as living like the “Grapes of Wrath.” He started school in California, and eventually his family moved back to Oklahoma where he graduated from Nowata School in 1950. He played football and enjoyed riding horses. In 1954 he met Mary Willis while cruising Main Street in Nowata. After dating for almost a year, they were married on May 29, 1955. After marriage Harley was employed by Pure Oil Co. in Nowata as a roughneck. After he was laid off, the couple moved to California where jobs were more plentiful. Harley took a position with Pepsi-Cola, but after a year and a half, became homesick and moved back home to Oklahoma. Harley went to work for a construction company and they lived in several small towns in Oklahoma and Arkansas before settling in Claremore in 1967. Harley went to work for McNabb Coal Co. in Catoosa and remained there until the company closed in 1988. Harley then went to work for Rogers County District 2, running road-graders, and retired in 1997. Harley and Mary had 4 daughters, Mary Jane, Brenda, Kathy and Susie. He also had his daughter Harla from a previous marriage. Harley was a devoted husband, father, grandpa, brother and friend. If you knew Harley then you know he was an avid story teller and boy did he have a story for anyone that would listen. He enjoyed hunting, collecting knives and going to gun shows, driving heavy machinery and sharpening knives that could cut through anything you can imagine, including skin. After retirement he was an avid landscaper who enjoyed caring for his yard and having the best looking grass on the block, sorry Jim Smith. He was also an expert squirrel trapper. He and Mary spent some time travelling with his sister Wanda and her husband Jim seeing many sights. He loved going to family reunions in California and Oklahoma to catch up with his many family members. You could often find him at many events involving his grandchildren or great grandchildren. No doubt he would often be seen in an OU Sooners hat, as he was a big Sooners fan. He is preceded in death by his mom, dad and his siblings, Bill, Wanda, Virginia and Son-in-law Earl McDoulett. He is survived by his wife Mary of 66 years, his daughters Harla Moore and husband Phillip, Mary Jane Anderson and husband Danny, Brenda Stonebarger and husband Charles, Kathy McDoulett, Susie Rains and husband Eddy, brother Ronald Holt and wife Sheryl, sister Anita McAlexander and husband John, “Double” cousin Harold Holt. Grandkids Sean Moore, Kris Stonebarger, Angie Hamilton, Reggie Anderson, Heather Moore, Earl McDoulett, Amanda Carlson, Alicia Nees, Blake Rains, and Shelby McCurdy; 24 great grandkids and 9 great-great grandkids; many friends, family and knife buddies. The family would like to send a special thank you to the nurses and staff at A-Vow Hospice for their amazing care of Harley and his family. The family has requested that in lieu of flowers, donations may be made to A-Vow Hospice of Broken Arrow in the name of Harley Holt.

Funeral service for Harley Otis Holt will be 11:30 a.m., Friday, October 1, 2021 at MMS-Payne Funeral Home Chapel, burial will follow at Fairview Cemetery. Friends may visit at the funeral home on Thursday, September 30 from 3pm-8pm, with family... View Obituary & Service Information

The family of Harley O. Holt created this Life Tributes page to make it easy to share your memories.

Send flowers to the Holt family.