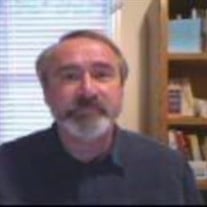 Funeral service for Wayne Guinn will be held at 10:00 a.m. Friday, July 24, 2020 at the MMS-Payne Funeral Home Chapel.  Burial will follow at Dawes Cemetery in Chelsea. Harold Wayne Guinn passed away on Monday, July 20th, 2020 at the age of 65. The son of Howard and Bettie Guinn was born September 4, 1954 in Adrian, Michigan.  He was raised in the Holland area of Michigan where he attended West Ottawa High School.  After graduation he enrolled at Hope College.  Then wanting to serve his country he joined the United States Army.  In 1980 after his honorable discharge Wayne returned to Michigan.  At this time he had completed his degree in accounting and was also an ordained minister.  Over the next several years Wayne would pastor at Central Wesleyan Church in Holland, Michigan, and  Christian Fellowship Church in Ashburn, Virginia.  During all of this time he also worked in the accounting industry.  In 2008 Wayne took a job for Collegiate Affairs in Washington DC.  He was there until moving to Oklahoma in 2017.  In Oklahoma Wayne began working for Creoaks Mental Health where he was still employed at the time of his passing.  In his spare time Wayne had many hobbies and past times he enjoyed.  He enjoyed writing and had been published many times.  He also enjoyed traveling the country and learning about the many different cultures.  One of his favorite destination was a conference that he attended every year and Cannon Beach.  Wayne loved his churches.  He was active in the church choir and also enjoyed teaching Bible study.  Most recently he was a part of the choir at the Bartlesville Wesleyan Church. He is preceded in death by his parents, Survivors include his fiance, Odessa Parks of the home; sons, Matthew Guinn of Holland, Michigan and Benjamin Guinn of Hudsonville, Michigan; grandchildren, Tristyn, Reegan, Natalie, Amber and Melanie Guinn; sister, Sheila Grigg; brother, Jerry Guinn, and step-children, Kevin Collins, Jennifer Goodenough, and Chris Collins. View and sign Wayne's online memorial at www.mmsfuneralhomes.com

Funeral service for Wayne Guinn will be held at 10:00 a.m. Friday, July 24, 2020 at the MMS-Payne Funeral Home Chapel.  Burial will follow at Dawes Cemetery in Chelsea. Harold Wayne Guinn passed away on Monday, July 20th, 2020 at the age of... View Obituary & Service Information

The family of Harold Wayne Guinn created this Life Tributes page to make it easy to share your memories.

Send flowers to the Guinn family.