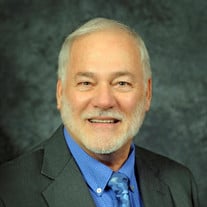 Graveside service for Harry Allen Simpson will be 2:00 p.m., Monday, June 1, 2020 at Oakhaven Memorial Gardens, Claremore, Oklahoma. Friends may visit at the funeral home on Sunday, May 31 from 3pm-6pm. Harry passed away on Saturday, May 23, 2020. He was 75. Harry Allen Simpson attended OMA from 1960 through his graduation in 1965. While on college Hill, he rose to the rank of Captain while being active in athletics (football, wrestling, track, tennis and bowling), Sergeant-at-Arms for the Chevron Society, Drill Team, Honor Court, Judge's Bench, Saber Society and more. He was in the best drill company and platoon, and also was active in campus chapel. After graduation, Simpson attended Oklahoma City University where he majored in business administration before joining the Army and serving with the 11th Armored Cavalry Division. He served in Vietnam from 1966 to 1967, after which he was stationed at Fort Hood Army Base in Texas. Professionally, he worked for Burns Construction of Claremore and Oklahoma Testing Laboratories in Oklahoma City as a metallurgist in inspecting bridges in Oklahoma, Texas and Missouri. Additionally, he performed structural inspection of high-rise buildings during construction. For the past 40 years, Harry has served as a senior draftsman at Midwest Detailing, LLC, where he also served as a primary structural steel detailer for high profile projects, nationally and internationally. He also has co-owned several companies, including McKim Solar Energy Systems, Simpson Cleaning Service, Aero-Sport Inc., Excel Telecommunications and Midwest Detailing Inc. He has been active in the community as a member of the Catoosa Chamber of Commerce and the Satoma Club of Catoosa; past president of the Ultralight Aircraft Association of Tulsa; and past instructor with the Junior Achievement Program at the Catoosa Middle School. In January 1966, Simpson married Deanna Burns (the 1965 Sweetheart of the Corps) and they had two children: daughter, Shannon (Simpson) Cline, and son Matthew, who died of leukemia in 1995 at the age of 18. The couple has three grandchildren: Savannah Evans, Mike Bright and Samantha (Bright) Robinson: great granddaughter Katherine Robinson. He served as an elder at the Claremore Seventh Day Adventist Church and has preached several sermons throughout northeastern Oklahoma. Simpson is honored by the Distinguished Alumni recognition, saying he has always been eager to do all he could to advance the OMA Alumni Association. He has been involved with the organization since being the first selected as a board member in 1971. Other family members that survive include his brother Bob Shackelford and wife Vicky, sister-in-law Suzie Simpson, nephews Geoffrey Simpson and Todd Simpson and niece Amy Lucas. Harry was preceded in death by his parents Son Matthew Simpson and brothers Bill Simpson and Thomas Simpson. For those who want to contribute in memory and honor of Harry may do so by contributing to the OMA Alumni Association c/o Danette Boyle, OMA Alumni Office, 1701 West Will Rogers Blvd., Claremore, Oklahoma 74017, or Playground Fund @ Seventh Day Adventist Church, 20555 South 4170 Road, Claremore, Oklahoma 74017.

Graveside service for Harry Allen Simpson will be 2:00 p.m., Monday, June 1, 2020 at Oakhaven Memorial Gardens, Claremore, Oklahoma. Friends may visit at the funeral home on Sunday, May 31 from 3pm-6pm. Harry passed away on Saturday, May... View Obituary & Service Information

The family of Harry Allen Simpson created this Life Tributes page to make it easy to share your memories.

Send flowers to the Simpson family.