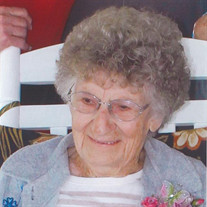 Memorial service for Irene Mary Shisler will be 11:00 a.m., Thursday, July 11, 2019 at Longville Bible Chapel, in Longville, Minnesota. Irene passed away Friday, June 21, 2019 at the Porta Caeli House in Tulsa. She was 104 years old. Irene was born May 5, 1915 in Donneybrook, North Dakota, to Monte and Lucy Mulvenna Rhodes. As a young girl she and her family moved to Harvard, Illinois. There she attended and graduated from Harvard High School as a member of the class of 1931. Upon graduating Irene began her working career. It led her to the Auto Lite company in nearby Woodstock, Illinois. After retiring from Auto Lite, she moved to Boy River, Minnesota to be near her brother Bob Rhodes. A short time later she purchased 40 acres near Longville, Minnesota. This allowed her to return to her roots. She began raising chickens, and got a horse as well. She planted a garden and canned the vegetables that she raised. She also began attending the Longville Bible Church. There she made many friends that she enjoyed having tea with over the years. However in 2013 Irene left Longville behind and moved to Claremore, Oklahoma to be near her family. She is preceded in death by her parents, Monte and Lucy Rhodes; son, James Herbert, daughter, Joanne Cooper 2 brothers, and 2 sisters. Those family members that survive include her children Nancy Webb and husband Laverne, Norma Ammerman, and Don Shisler and wife Sandy all of Claremore; grandchildren, Mike Blazer and wife Melonie, Debi Lemieux, Tina Blankenship, Chad Cooper and wife Krissi, Kay and Kevin Logue, Stan and Susie Webb, Jim and Vicki Webb, Ronnie and Vicki Wheeler, Maureen and Paul Swentkofske, Duane Wheeler, Richie and Wendy Wheeler, Connie Snyder, Stacey Shisler, Vicki Shisler, Michael Shisler, 30 great-grandchildren, and 21 great-great-grandchildren along with many other extended family. Memorials may be made in Irene's honor to the Porta Caeli House at 2440 N. Harvard Ave, Tulsa, OK 74115 View and sign Irene's online memorial at www.mmsfuneralhomes.com

The family of Irene Mary Shisler created this Life Tributes page to make it easy to share your memories.

Send flowers to the Shisler family.