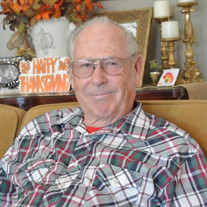 Ivan Lee Motter was born on January 19, 1932, to George Washington Motter and Vera Marie (Barber) Motter in Yukon, Oklahoma. He passed away on June 20, 2021, in Pryor, Oklahoma at the age of 89.       When Ivan was 12 years old, his family moved to Rogers County and began operating a cattle ranch where he worked alongside his dad.  As a boy, Ivan raised his own polled Hereford cattle and other livestock. He attended Chouteau Public Schools and graduated with honors in 1950.  While in high school, Ivan was heavily involved in the Future Farmers of America where he earned numerous awards and served as chapter president. One of Ivan’s greatest accomplishments was becoming the first FFA member from Mayes County to be elected as a State FFA Officer in 1951-52, while attending Northeastern Oklahoma A & M Miami. He served as vice-president of the Oklahoma Northeast District.  Also, in 1953, he became the first FFA member from Mayes County to be awarded the Degree of American Farmer. Ivan married the love of his life, Zoann Moffett, in Chouteau, Oklahoma on June  3, 1955. The two made their home in rural Pryor were they raised their family. Ivan was a determined and hard-working man, operating his own drywall business for over 50 years.  He  had many hobbies during his life. He loved to go fishing and hunting, especially his yearly Colorado elk hunt. He also loved to work in his vegetable garden, tend his flower beds, raise cattle, and tool leather.  Ivan is  preceded in death by his wife Zoann Motter; parents George and Vera Motter; sister Colleen Rohr; and brothers Arlyn Motter and Allen Motter.  He  is survived by his children Penny Dill and husband Bill; Mark Motter and wife Linda; Audie Motter and wife Kitty; 13 grandchildren, 26 great-grandchildren, 2 great-great grandchildren, and one sister Carol Gunter. Ivan will be remembered for his deep love and devotion to his family, his kind and generous spirit, and his love for telling jokes.

The family of Ivan Lee Motter created this Life Tributes page to make it easy to share your memories.

Send flowers to the Motter family.