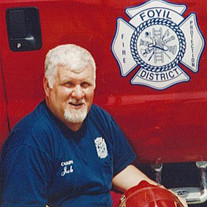 Funeral service for Jack Raymond Sampson will be 2:00 pm Thursday, November 21, 2019, at Friendly Foyil Baptist Church, with burial following in Ward's Grove Cemetery. Visitation will be from 1-8 pm on Wednesday, November 20, 2019, at MMS-Payne Funeral Home in Claremore, with family receiving friends from 6-8 pm. Jack passed away at his home in Claremore on Sunday, November 17, 2019. He was 59 years old. The son of Jack Elijah Sampson and Beulah Vina (Holland) Sampson was born on May 11, 1960, in Chandler, OK. As a young boy, he moved with his family to Claremore, and finally to Foyil, where he graduated with the class of 1979. After graduation, Jack began his working career with Peabody Coal Company as a heavy equipment operator. In 1995, he began working for Delta Steel as a truck driver, and later he also drove a truck for Steel and Pipe Company. In the late 1980's and early 1990's, he served as a Rogers County Sheriff's Deputy. From 1998-2005, he was also a volunteer fireman, and served on the Foyil Fire Board. On September 30, 2016, he and Carol Ann Shigley were married in a Foyil ceremony. Those who knew Jack knew that he was an amazing dad, husband, and community member. He had a big heart and was always friendly to everyone he met. In his spare time, he enjoyed hunting, fishing, and hanging out with friends. But his favorite times were those spent with his family. He especially loved being a Papa. Jack was preceded in death by his parents, Jack and Beulah Sampson. His survivors include his wife Carol; children Craig Sampson and fiance` Andrea New, Justina Pratt and husband Stanley, and Mark Shigley and wife Courtney; grandchildren Elijah Webster, Lillian New, Emma Sampson, Devon, Kaison, Sherenda, and Kimiko Pratt; and great-grandchildren Kaycie, Keith, Micaiah, and Hediah, along with numerous friends and extended family members. Memorial donations may be sent to Claremore Veterans Center, 3001 W. Blue Starr Drive, Claremore, Oklahoma, 74017. View and sign Jack's online memorial at www.mmsfuneralhomes.com.

The family of Jack Sampson created this Life Tributes page to make it easy to share your memories.

Funeral service for Jack Raymond Sampson will be 2:00 pm Thursday,...

Send flowers to the Sampson family.