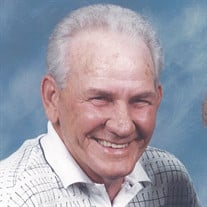 Memorial service for James Harmon will be held 2:00 p.m, Thursday, August 18, 2020 at the First Baptist Church of Inola. Visitation will be held on Wednesday, August 17, 2020 at the Inola Funeral Home from 1-8 p.m., with family greeting friends from 6-8 p.m. James Franklin Harmon known to many as "Chipmunk" passed away on August 8th, 2020 at the age of 85. The son of Emmitt and Zelpha Medlock Harmon was born December 29th, 1934 in Inola, Oklahoma. As a young boy he was raised in Inola, where he would attend Inola schools. At the age of 19 James enlisted in the United States Army. He spent the majority of the next 3 years stationed in Anchorage, Alaska where he was serving as a gunner. Upon his discharge James returned home to Oklahoma. He then took a job in Tulsa working for Flint Steel. This job would turn out to be more important then James could have imagined. It was while working there that he decided to visit a local diner called Rena's. It was there that he first met Joan Rea. The two would begin dating and married on June 25, 1959. The newly wed couple would spend the next couple of years in Manhattan, Kansas, while James was working in the oil fields. In 1961 James and his family moved to the west side of Tulsa. Eventually James took a job with Horner and retired from there in 1976. In 1976 James and his family moved to Inola. There he would became a very active and well know part of the community. James also was an avid Inola Longhorn fan. He could be found at just about any Inola sporting event. Although baseball was probably his favorite. In his spare time James enjoyed going to the gym, playing dominoes, and golf. He loved mowing his yard, listening to his favorite musician Elvis Presley, and watching the Oklahoma Sooners. However his favorite past times always revolved around his family. He is preceded in death by his parents Emmitt Harmon and Zelph Williams; son, Darren Harmon; grandson, Brian Harmon; sister, Norma Martens, and brothers, Donald and Steve Harmon. He is survived by his wife, Joan Harmon; children, Kent Harmon, and Thea Moss and husband Greg all of Inola; grandchildren, Brandon Hubbard of Locust Grove, Ryan Moss and wife Chelsi of Pryor, Taylor Moss of Broken Arrow, and Gage Mullen of Inola; great-grandchildren, Lacy, Courtney and Shawn of Locust Grove, Kelsey and Ethan of Wynnewood, and Anniston of Pryor; sisters, Patricia Rogers, Vicki Allen, and Susan Van Houten; step brother, Bob Williams; step-sister, Bonnie Claxton and a host of cousins and friends. View and sign James online memorial at www.mmsfuneralhomes.com.

The family of James Harmon created this Life Tributes page to make it easy to share your memories.

Memorial service for James Harmon will be held 2:00 p.m, Thursday,...

Send flowers to the Harmon family.