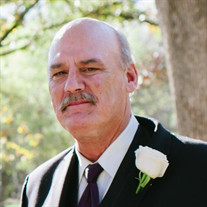 Memorial service for James "Jim" John Hoffman, Jr. will be 12:00 p.m., Saturday, January 18, 2020 at MMS-Payne Funeral Home Chapel.  Jim passed away on Wednesday, January 8, 2020.  He was 61.   Born August 19, 1958 in Tulsa, Oklahoma to James John Hoffman, Sr. and Shirley (Barnes) Harrington, Jim attended schools in Jenks before his family moved to Memphis, Tennessee.  He spent a short time in Memphis before moving back to Oklahoma, and he finished school in Tulsa at East Central High School. Jim continued his education at Crowder College on a baseball scholarship.  Jim played baseball from the time he could walk.  His pitching skills, home-run hitting skills, and love of the game made him a remarkable player. He was awarded Tulsa Tribune’s All-City Player of the Year in 1977.   On September 29, 1979 Jim married Debbie Long and the couple made their home in Tulsa, and together raised their daughter Melissa.  Jim began working at American Airlines in 1987 and was a faithful employee for 33 years until his passing.  His job title was Material Logistic Specialist, but he told his friends that he was a pilot, “I pile it here and pile it there”; this was one of his favorite sayings.  Jim loved to play golf and watch boxing. He also enjoyed fishing, especially with his daughter.  He was a huge fan of both Babe Ruth and Mickey Mantle and loved the 3 Stooges.  His family was most important and he loved seeing his daughter and grandson as much as he could.  Jim was most excited about the arrival of his granddaughter in spring this year.   Those family members that survive include his wife Debbie Hoffman; his daughter Melissa Murray and husband Travis; grandson Miles Murray and granddaughter on the way; his sister Karen Stevens and husband Billy of Cordova, TN; brothers Michael Hoffman of Ewa Beach, HI, and David Hoffman and wife Michele of Hudson, FL; his mother and father-in-law Mary and Bob Long and his brother and sister-in-law Roger and Beverly Long, and many nieces and nephews.  Jim was preceded in death by his parents, and his nephew Trey Lawler.

The family of James "Jim" Hoffman Jr. created this Life Tributes page to make it easy to share your memories.

Send flowers to the Hoffman family.