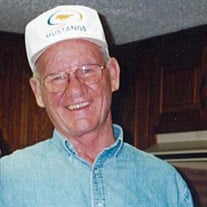 James Harley O’Donnell, 83, passed away on June 22, 2020, at Oxford Glen Memory Care Center in Owasso, Oklahoma. He was a beloved husband, father, grandfather, teacher, coach, and friend. James was born in Perkins, Oklahoma, on May 29, 1937, to Charles and Laurl O’Donnell. He attended Stillwater schools all his life and graduated from Stillwater High School in 1956. He received Bachelor’s and Master’s degrees in Education from Northeastern State University, but he was an OSU Cowboy through and through. On November 25, 1964, he married Betty O’Donnell in Fairfax, Oklahoma. He often said that his secret to a happy life was simple, “being married to a wonderful girl from Sallisaw.” He served in the U.S. Army Reserves from 1960 to 1965. His teaching and coaching career began in 1964 and spanned 32 years, the last 22 of which were at Oologah-Talala Public Schools. He retired in 1995 after touching the lives of hundreds of students and players, who knew him as “Coach O.” His players still remember his favorite phrases, “no pain, no gain,” “no birddoggin’,” and “to the fence and back, boys.” James also served as a historical guide and “resident expert” at Will Rogers birthplace and Will Rogers Memorial for 27 years. His big laugh, sense of humor, and witty personality will be missed by all. His family will miss his quiet strength, giant bear hugs, and unconditional love. He is survived by his wife, Betty O’Donnell of Oologah, Oklahoma; daughter, Cindy O’Donnell-Allen and son-in-law Will Allen of Fort Collins, Colorado; daughter, Jayme Hancock and son-in-law Don Hancock of Oologah, Oklahoma; grandchildren, Lexie Allen, Lynley Allen, Austen Allen, Jayce Hancock, and Wyatt Hancock; and brother, Tim O’Donnell. He was preceded in death by his parents, Charles and Laurl, and his siblings, Charles, Bob, Ted, and Karen. The funeral service will be held at 10:00 AM, Friday, June 26, at Harbor Church in Oologah, OK, with a graveside service following at Oak Hill Cemetery, also in Oologah. MMS-Payne Funeral Home in Claremore, OK, will hold a viewing from 1:00-7:00 PM on Thursday, June 25, with family receiving visitors from 5:00-7:00 PM.

James Harley O&#8217;Donnell, 83, passed away on June 22, 2020, at Oxford Glen Memory Care Center in Owasso, Oklahoma. He was a beloved husband, father, grandfather, teacher, coach, and friend. James was born in Perkins, Oklahoma, on May 29,... View Obituary & Service Information

The family of James Harley O'Donnell created this Life Tributes page to make it easy to share your memories.

Send flowers to the O'Donnell family.