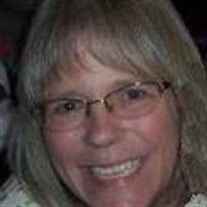 Memorial service for Janice Jones will be held 11:00 a.m. Thursday, December 19, 2019 at the MMS-Payne Funeral Home. Janice Lynn Jones passed away on December 14th, 2019 at St. Johns Medical Center at the age of 64. The daughter of Arthur and Emma Jean (Andres) Andersen was born February 16th, 1955 in Ludington, Michigan. There she was raised and later attended Ludington schools. She graduated as a member of the Ludington High School class of 1973. Upon graduating, Janice decided to join the United States Navy. She entered active duty on January 18, 1974. During her time in the service she was stationed in San Diego, California. Upon her discharge, she decided to remain there for four years while attending San Diego State University. She then took a job working for the local Veterans Hospital. While working there, she met Kurt Jones. The two began dating and would marry on August 25, 1979. Over the next ten years, Janice and Kurt would remain in San Diego. Their next move would take them to Utah for six years, before making their final move to Claremore, Oklahoma. She quickly accepted a job working at Claremore Regional Hospital as a social worker. She worked there until retiring around 2007. In her spare time Janice enjoyed participating in many things. She served as treasurer for the Claremore Senior Care Day, and enjoyed all the time spent with the Bible Study Fellowship. She also enjoyed traveling, and spending time on the lake. She is preceded in death by her parents, Arthur and Emma Jean Andersen, and sister, Debra Andersen. Survivors include her husband, Kurt; children, Elysia Robinson and husband Shawn, Chris Jones, and Amanda Wietholter and husband Jason; grandchildren, Jax, Jacob, Savanna, Logan and Kailynn; sisters, Cheri Hernandez, and Sandy Renteria; along with many other extended family.

Memorial service for Janice Jones will be held 11:00 a.m. Thursday, December 19, 2019 at the MMS-Payne Funeral Home. Janice Lynn Jones passed away on December 14th, 2019 at St. Johns Medical Center at the age of 64. The daughter of Arthur... View Obituary & Service Information

The family of Janice Lynn Jones created this Life Tributes page to make it easy to share your memories.

Memorial service for Janice Jones will be held 11:00 a.m. Thursday,...