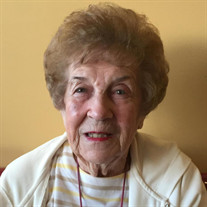 Jean Ann Overmyer Essley passed on May 26, 2021 at Hillcrest Medical Center following a complicated case of pancreatitis. Jean was born January 15th, 1929 in Fairmount, Indiana. At age four she moved with her family to Tulsa. She attended Central High School and was active with her reunion group for many years. She was at OSU for only one year, but an Alpha Delta Pi for life. She met Philip L. Essley, Jr. in junior high; they married in 1947. She is preceded in death by her husband, her parents, George and Brenda Overmyer, siblings Keith Overmyer, Jon Overmyer and Annette Willis, and her daughter Janan Essley Murphy. She is survived by her sister Janette Layne of Cleora, Oklahoma, by three of her children, Jon Keith Essley of Laramie, Wyoming, Jennifer Essley Judson of Tulsa and Joffre Scott Essley of Staunton, Virginia, and by seven grandchildren and eight great-grandchildren, with one on the way. In 1972, Jean was told her metastatic breast cancer would take her life within two years. She far exceeded her expiration date. Jean and Phil moved many times and made great friends everywhere they went. She especially loved her home and neighbors in Hallowing Point, Virginia. She was a twenty-year volunteer at the Smithsonian Institution. In retirement, they moved back to Oklahoma reconnecting with many friends from their younger years. After Phil died, she moved to the Montereau retirement community and often stated she hadn’t met a soul that wasn’t happy there. We were blessed to have her as our mother, grandmother and great-grandmother. There will be a graveside service at Memorial Park in Tulsa, Oklahoma, June 1st at 2:00 p.m. The service can be seen via livestream at MMS-Payne page on Facebook. In lieu of flowers, Jean’s favorite charity was Give Kids the World in Kissimmee, Florida, where her eldest daughter worked for ten years.

Jean Ann Overmyer Essley passed on May 26, 2021 at Hillcrest Medical Center following a complicated case of pancreatitis. Jean was born January 15th, 1929 in Fairmount, Indiana. At age four she moved with her family to Tulsa. She attended... View Obituary & Service Information

The family of Jean Ann Essley created this Life Tributes page to make it easy to share your memories.

Send flowers to the Essley family.