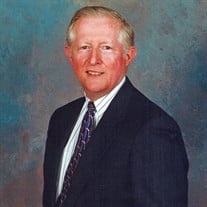 Memorial service for Gerald Mason "Jerry" Hayes will be 2:00 p.m., Thursday, November 18, 2021 at MMS-Payne Funeral Home Chapel, friends may visit at the funeral home on Wednesday, November 17 from 6pm-8pm. Jerry passed away on Thursday, November 4, 2021. He was 83. Jerry was born August 28, 1938 in Chicago, Illinois to Ray Gerald and Clarice (Mason) Hayes. At a young age his family moved to Wilmington, Delaware and this is where he received his education. Jerry continued his education at Delaware University on a basketball scholarship, graduating with a Bachelor's degree. Always a hard worker that could excel at anything he put his mind to, Jerry began demonstrating Hoover vacuum cleaners at Sears. It wasn't long before he worked his way to management. After working for Hoover for a time, Jerry went to Whirlpool and when Panasonic bought them, he continued a long career there as Vice President of his department. Following retirement, Jerry headed up the hospice division for Beggs and Claremore Compounding Pharmacies. Jerry loved being outdoors; canoeing and kayaking were among his favorite pastimes. Yard work wasn't a chore, he enjoyed the time outside. His friends and family were most important and he loved spending time with them. The OU Sooners and the Cleveland Browns were the teams he rooted for, but he followed all of the high school teams as well. Jerry was a member on the boards of Rogers County Youth Services and Rogers County Salvation Army. Both organizations benefited from his drive, imagination, and organizational skills. He excelled as Director of Bell Ringing and included many organizations and individuals to participate to reach our goal. He made a huge difference and will be sorely missed. This years bell ringing will be in Jerry's honor. Those family members that survive include his wife Sheri Hayes; sons Drew Hayes, Jay Hayes, Brian Hayes, and Scott Long; daughters Beth Young, Amy Blok, and Michelle Naturale; his brother Warren Hayes; 8 grandchildren; 6 great grandchildren. Jerry was preceded in death by his parents. In lieu of flowers please consider a contribution to the Salvation Army, Rogers County, P.O. Box 2728, Claremore, Oklahoma 74018.

The family of Jerry Hayes created this Life Tributes page to make it easy to share your memories.

Memorial service for Gerald Mason &quot;Jerry&quot; Hayes will be 2:00...

Send flowers to the Hayes family.