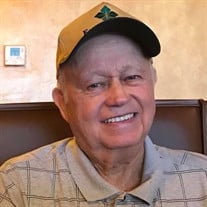 Service for Jerry D. Reed will be 10:00 a.m., Tuesday, October 8, 2019 at Sequoyah Baptist Church. Friends may visit at the funeral home on Monday, October 7th, from 1pm-8pm, with family receiving visitors from 6pm-8pm. Jerry passed away on Thursday, October 3, 2019. He was 78. Born October 24, 1940 in Claremore to Wilburn and Edna (Emery) Reed, Jerry attended school at Sequoyah, graduating with the class of 1959. Following his schooling, he worked for Warehouse Market where he stocked and ran the register. On June 2, 1962 he married Linda Joyce Johnson and together they raised 3 children. Jerry later began a career with Oklahoma Natural Gas Company, where he worked as distribution foreman, retiring in July, 1998 after 32 years of service. Jerry enjoyed hunting and fishing, but his family was most important to him. He provided well for them and made sure they had what they needed. He followed his children and later grandchildren with their sporting events. He coached little league and even played softball when he was younger. Jerry was devoted to his wife Linda, helping her maintain an Antique store in Claremore. They also loved to travel, and together saw many different places. Those family members that survive include his children Stacy Sutton and husband John of Pryor, Scott Reed and wife Shelley of Vinita and Stephanie Milburn and husband Michael of McKinney, Texas; grandchildren Traci Weaver and husband Tracy, Mallorie Muhle and husband Jessie, Ryan Lemmings and wife Miranda, Bethanie Wishard and husband Billy, Nathan Reed and wife Molly, Gunner Reed and wife Dana, Hallie Reed, Reed Hadley and wife Katelyn, Riley Hadley and Ean Milburn; great grandchildren Grace, Faith and Hope Hager, Sarai, Aaron, Isaac Muhle, Oliver Lee, and Ellis Lemmings, Rayden and Tucker Wishard. and Mason Reed, and sister; Margie Jones and husband Dallas. Jerry was preceded in death by his parents, wife Linda, and three siblings, W.J. Reed, Leroy Reed, and Ruth Cooper

Service for Jerry D. Reed will be 10:00 a.m., Tuesday, October 8, 2019 at Sequoyah Baptist Church. Friends may visit at the funeral home on Monday, October 7th, from 1pm-8pm, with family receiving visitors from 6pm-8pm. Jerry passed away... View Obituary & Service Information

The family of Jerry Donald Reed created this Life Tributes page to make it easy to share your memories.

Send flowers to the Reed family.