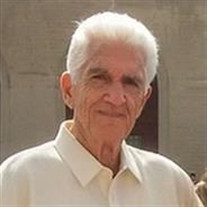 Jerry Carl Ussrey born November 25, 1930 in Sallisaw, Oklahoma to parents Claud and Macy (Goff) Ussrey passed away on January 19, 2022 in Claremore, Oklahoma. Jerry spent his early years in Tulsa, Oklahoma graduating from Daniel Webster High School in 1948. Shortly after graduation Jerry served his Country in the United States Army fighting in Korea from 1952-1955. He started his career as a teenager working for the Tulsa World-Tribune, where he remained a faithful employee for 35 years. He moved to Bonne Terre, Missouri in 1985. After the passing of his wife Dorothy Jean in 2003, he moved to Claremore, Oklahoma where he remained till his death. he is preceded in death by his first wife Twyla June of Cleveland, Oklahoma of whom he was blessed with his only child, daughter Linda; his sisters Oretta “Sis” and Jane of Lawton, Oklahoma and brother Claud Jr of Tulsa, Oklahoma. He is survived by his daughter Linda Howard, (Robert) of Claremore, Oklahoma; grandchildren, Natalie Gorman (Lance) of Kansas City, Missouri; Thomas Howard (Annie) of Claremore, Oklahoma and Eric Howard (Alisha) of Ada, Oklahoma. Great-grandchildren; Savannah and James (Natalie); Julia “Eva”; Emma, Elena, Nathanael “Nate”, Elisea “Ellie”, Erriana, Ezekiel “Zeke”, Gabriel “Gabe” and Michael “Ike” (Thomas); and Avery and Benjamin “Ben” (Eric). He is also survived by nieces and nephews. But I would not have you to be ignorant, brethren, concerning them which are asleep, that ye sorry not, even as others which have no hope. For if we believe that Jesus died and rose again, even so them also which sleep in Jesus will God bring with him. I Thessalonians 4:13,14

The family of Jerry Carl Ussrey created this Life Tributes page to make it easy to share your memories.

Send flowers to the Ussrey family.