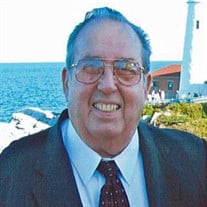 Jimmy Dan Millikin was born to Dan and Rosa Millikin Sept. 19, 1932 in Romona, OK. and passed from this life March 6, 2021at his home in Claremore, OK., he was 88 years old.  Jim spent most of his growing up years living east of Foyil, OK.,... View Obituary & Service Information

The family of Jimmy Dan Millikin created this Life Tributes page to make it easy to share your memories.

Send flowers to the Millikin family.