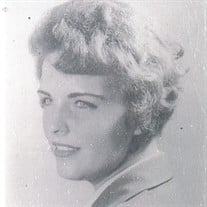 Memorial service for Joan Kathleen Reif will be 10:00 a.m. Thursday, September 16, 2021, at the MMS-Payne Funeral Home Chapel in Claremore, Oklahoma, under the direction of MMS-Payne Funeral Home and Cremation Service. Joan passed away Wednesday, September 8, 2021, at the age of 79. The daughter of Clide W. Collins and Mae A. (Barquist) Collins was born in South Milwaukee, Wisconsin on October 11, 1941. She graduated from Cudahy High School in 1960. As a child, she was a tomboy, and after graduation, she decided to join the US Air Force as a Medcial Service Specialist. It was at Eglin Air Force Base in Florida that she met Gerald Reif, who became her husband on June 3, 1961. After leaving the Air Force, Joan enjoyed raising dogs; English Springer Spaniels, Mini Schnauzers, Collies, and Great Pyrenees were among the breeds that she raised and loved. She was a regular attendee of First United Methodist Church of Claremore. In her spare time, she loved to read and write, and had her works published in various magazines. Most of all, she cherished time spent with her grandchildren. Joan was preceded in death by her parents. Those left to mourn her passing are her husband Gerald; brother Gerald Collins and wife Rayola; children Tammy Chatterbuck and husband Randy, Richard Reif and wife Paula, Michael Reif, James Reif and wife Linda, and Robert Reif and wife Alicia; grandchildren Rachael McCarty and husband Vernon, Daniel Chatterbuck and wife Lindesy, Matthew Reif, Elliott Reif, Mikalyn Reif, Alex Reif, Christopher Reif, Erick Reif, and Courteney Reif; great-grandchildren Garrett, Josephine, and John McCarty, and Izzie, Kyle, and Noah Craig; as well as numerous friends and loved ones. View and sign Joan's online memorial at www.mmsfuneralhomes.com.

The family of Joan Kathleen Reif created this Life Tributes page to make it easy to share your memories.

Memorial service for Joan Kathleen Reif will be 10:00 a.m. Thursday,...

Send flowers to the Reif family.