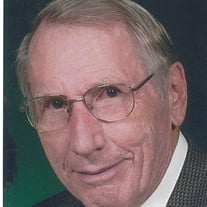 Joel Flynn Jones, loving husband, father, and grandfather, died peacefully at home on May 18, 2021. He was 85 years old. Joel was born to Nina Sellers and William George Jones on September 9, 1935 in Watts, Oklahoma, the youngest of four children. He graduated from Watts High School, and the next day moved to Colorado to work in the oil fields. He returned to Oklahoma to attend Northeastern State College. He then moved to Tulsa to begin work at Danuser Machine Works and soon met his wife of 63 years, Ruby Sullivan, on a blind date. They built their life together, moving to Claremore in 1967, when Danuser relocated there. The company sold to International Harvester and then Hesston Corporation, with Joel leading the engineering departments. He finished his education at Tulsa University where he received his bachelor's degree in business administration in 1979. After a brief tenure at Centrilift, Joel took a leap of faith and, with Ruby's support, began JFJ Industries in 1988. His tenacity and resolve were never more on display than when he worked to perfect the manufacturing processes required for the company's success - sometimes in the middle of the night in his home kitchen. Soon after launching JFJ Industries, Joel was diagnosed with a rare and aggressive form of cancer. The family is grateful to Dr. Morie Gertz at the Mayo Clinic for diagnosing and treating him, adding decades to his life. He was a Mayflower descendant, and that determination and can-do spirit seemed to have survived the generations. A true engineer, Joel could design, fix, or build most anything, and he never met a machine he didn't like. He designed several homes, a couple of manufacturing plants, and even a church kitchen. He is the named inventor on four patents. Joel and Ruby enjoyed traveling in retirement, taking trips all over the world, mostly on cruises. At age 75, he and his son attended “pecan school” at Oklahoma State University and developed an 800-tree orchard where he spent many hours happily productive. That was also the year he informed his family of his desire to parachute out of an airplane. And he did it. He was a lifelong Methodist and member of First United Methodist Church of Claremore for more than 50 years, serving on many committees and in leadership roles there. Well done, good and faithful servant. You taught us to color within the lines; the value of willpower, hard work, and integrity; that "can't" is a bad word; if it seems too good to be true, it probably is; how to deconstruct an algebra word problem; if something is worth doing, it is worth doing well; and that family matters. He is survived by his wife, Ruby, of their home in Claremore, his daughter Diane Jones Brown (husband Sanford "Sandy") of Dallas, his son David Joel Jones (wife Jami) of Claremore, and his beloved grandchildren Sarah Brown Cornelia (husband Matt) of Dallas, Joel William "Will" Brown of Dallas, Benjamin Joel Jones of Claremore, and Brooke Hailea Jones of Claremore. A celebration of life will be held Tuesday, May 25, at 2 p.m. at the First United Methodist Church in Claremore, with a reception following in the Family Life Center. In lieu of flowers, the family would be honored with a donation to the First United Methodist Church Children’s Building Fund or the Claremore Public Schools Foundation.

Joel Flynn Jones, loving husband, father, and grandfather, died peacefully at home on May 18, 2021. He was 85 years old. Joel was born to Nina Sellers and William George Jones on September 9, 1935 in Watts, Oklahoma, the youngest of four... View Obituary & Service Information

The family of Joel Flynn Jones created this Life Tributes page to make it easy to share your memories.