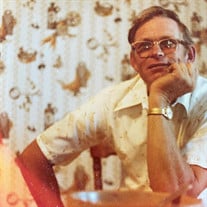 John Cherry was born on July 15, 1930 to Agnes Tyler and John Cherry in Verdigris, Oklahoma. He was given the name Junior.  He was the second born of nine siblings and worked hard for his family. John’s first marriage was to Doris Early. They had two children, John and Rita, before they divorced. He joined the U.S. army in 1954 and served in the artillery division in Germany during the Korean War.  He was honorably discharged in 1957, and stayed connected to the Veterans community all his life. Back in Claremore, John met Ruth Ophadee Wilhoite.  They married in 1958 and John became stepfather to Ruth’s two children, Barbara and Larry. John and Ruth had a happy marriage of 55 years.  John worked hard for the City of Claremore in the water and electric departments.  He loved the outdoors—camping, hunting and fishing.  He was athletic and enjoyed playing and watching sports.  He and Ruth were active volunteers in the local VFW chapter down the road from their house in Claremore.  John could often be found doing handyman projects while Ruth cooked food for events, at which they’d be seen dancing together.  He had a playful, joyful side, and loved joking and wrestling with the grandkids.  In his later years he cared for his dog Jake and kept a beautiful garden.  His soul left this earth on May 24, 2021.  In his last days he was singing. John is preceded in death by his wife Ruth Cherry, daughter Barbara Rader, son John Early Cherry, and siblings Joann, Evelyn, James and Wes. He is survived by son Larry Horton and partner Lori Bingaman, daughter Rita Faye, chosen family Vicki Stites, siblings Ruby, Frank, Kathy, and Glenda Sue, 6 grandchildren, 10 great-grandchildren, and 3 great-great-grandchildren.

John Cherry was born on July 15, 1930 to Agnes Tyler and John Cherry in Verdigris, Oklahoma. He was given the name Junior.  He was the second born of nine siblings and worked hard for his family. John&#8217;s first marriage was to Doris Early.... View Obituary & Service Information

The family of John Cherry created this Life Tributes page to make it easy to share your memories.

Send flowers to the Cherry family.