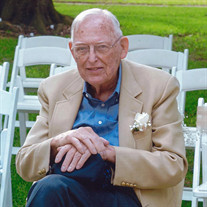 Memorial service for John Harold Layman will be 10:00 a.m., Monday, October 14, 2019, at MMS-Payne Funeral Home Chapel. Harold passed away on Thursday, October 10, 2019. He was 91 years old. Born January 9th, 1928, in Tulsa, Oklahoma to John and Stella (Patterson) Layman, Harold attended school at Will Rogers High, and graduated with the class of 1944. He began college and later enlisted with the US Army, where he proudly served his country in the Philippines during the end of WWII. Harold returned home following his honorable discharge, and continued his education at Oklahoma A&M, now Oklahoma State University. While in college, Harold met Corrine Faye McQuain, and on January 29, 1949, the couple married. When he finished college, they moved to Tulsa, where Harold worked for the government as an inspector. He later began working for APAC, first in sales, and later becoming Vice President of sales. He was an excellent teacher, and led by example throughout his career. Harold’s relationship with Christ was evident in all he did in life, and he ministered to many in need. Harold retired and loved spending time in his garden. He also helped his wife, Corrine, with her antique shop, Attic Treasures. Harold was the person who moved furniture, repaired items for resale and helped make Corrine's business a success. He enjoyed studying his Bible and also loved teaching Bible studies at the Adult Day Care. He and Corrine also spent many good times at the Senior Citizens Center, having lunch and seeing friends. His last two years have been spent at Canoe Brook where he taught the Bible to the residents. Again he found his purpose, as he did in each part of his life. Harold had given scriptures to each of his grandchildren to reflect on. He often asked about his grandchildren and prayed for them always. Those family members that survive include his sons Shelton Layman and wife Linda of Claremore, and Dave Layman and wife Beth of Leavenworth, Kansas; his grandchildren Lauren Hershberger and husband Ben, Jake Layman and wife Jamie, Mary Kate Schilling and husband Matt, Jack Layman, Grant Layman, Hannah Grace Layman, Abigail Layman, Jonathan Layman, Andrew Layman, Gabriel Layman, and Emma Layman; great-grandchildren Beckett, Charlie, Raylan, Rhett, Max, and Ali; and his special friend Val Gladder. Harold was preceded in death by his parents, wife Corrine of 62 years, granddaughter Lacy Layman, and brother Neil Layman. View and sign Harold's online memorial at www.mmsfuneralhomes.com.

The family of John Harold Layman created this Life Tributes page to make it easy to share your memories.

Send flowers to the Layman family.