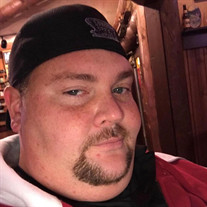 Funeral service for Jonathan Andrew Baldwin will be 1:00 p.m. Monday, August 30, 2021, at First Baptist Church of Inola. Burial will follow in Highland Cemetery under the direction of Inola Funeral Home and Crematory. Visitation will be at the funeral home on Sunday, August 29, from 1-6 p.m., with family receiving friends from 4-6 p.m. Jonathan was welcomed into his heavenly home, Tuesday, August 24, 2021 at the age of 40. The son of James Leon and Marlene Susanne (Jantzen) Baldwin was born in Norman, OK on November 10, 1980. As a young child Jonathan was raised in Edmond. With Jonathan's father being in the ministry, his family would live in a few different places over the next several years. Eventually Jonathan and his family would settle in the Claremore area where he grew up and attended Verdigris junior high, where he enjoyed playing football. Jonathan also received Christ into his life while at First Baptist of Verdigris and grew in the Lord there with the youth group. He would later attend Claremore High School, where he excelled in agriculture and shop class. He was a member of the Claremore High School graduating class of 1999. It was also in his high school years that he began working with his father at J & J Construction. The company would eventually move to Inola where Jonathan has lived ever since. Once in Inola, Jonathan would meet Joy Gilmore. The two would begin dating, and married on December 4, 2004. After Joy's passing in 2007, Jonathan continued to live and work in the Inola area. He stayed busy building and remodeling homes, running cattle, and hauling hay. In October 2016, Johnathan met Tammy Myers. The two were wed in June 2017. Together the new couple enjoyed traveling, to places such as Branson, and attending church, especially the small group classes. Currently they were in the process of moving into their new home. Jonathan had many other hobbies and past times. He was a talented musician, who could play the harmonica, and anything with strings. He enjoyed four wheeling, and spending time with his cousins, his family, and the many friends whose friendships he enjoyed. Jonathan is preceded in death by his father Jim, and his wife Joy. Survivors include his wife Tammy; mother Marlene Baldwin; mother-in-law Barbara Myers; brother David Baldwin and wife Kendra; niece Kenslee; uncles Miles Baldwin and wife Amy, and Mike Clem and wife Letha; and cousins Stephanie Sanchez, John Sanchez, Joey Baldwin, and Susan Johnston; his dog Marsh; along with many other friends and extended family members. View and sign Jonathan's online memorial at www.mmsfuneralhomes.com.

Funeral service for Jonathan Andrew Baldwin will be 1:00 p.m. Monday, August 30, 2021, at First Baptist Church of Inola. Burial will follow in Highland Cemetery under the direction of Inola Funeral Home and Crematory. Visitation will be at... View Obituary & Service Information

The family of Jonathan Andrew Baldwin created this Life Tributes page to make it easy to share your memories.

Funeral service for Jonathan Andrew Baldwin will be 1:00 p.m....

Send flowers to the Baldwin family.