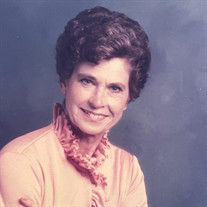 Funeral service for Josephine Bentley will be held 10:00 a.m., December 30, 2021 at Sageeyah Baptist Church. Burial will follow at Woodlawn Cemetery. Josephine Ann Bentley passed away on Wednesday, December 22nd, 2021at her home in Claremore at the age of 91. The daughter of Richard James and Ruby (Gordineer) Ham was born April 5th, 1930 in Inola, Oklahoma. Being the daughter of a share cropper, Josephine and her family moved from time to time. She spent time in Inola and Verdigris before moving into the Owalla Communtiy. It was while attending Owalla schools that she first met Basil Bentley. He was the best friend of her brother James. As the years went by Josephine and Basil became close and began dating. They would marry on March 7, 1948, and make their home in the Foyil area. Eventually they would build a home in the Dog Creek Hills, a place that Josephine specifically picked based on the amount of dog wood trees located on the property. She would move to Claremore in 2017. Throughout her life Josephine's family was her priority. She considered herself the ultimate homemaker. However there was a time when she worked outside the home as a bailiff for Rogers County. In her spare time Josephine had many hobbies and past times she enjoyed. Throughout her life with the help of Basil, she loved gardening. She raised roses, and wild flowers, along with many others. At one time she even had an orchard complete with apples, pears, peaches and plums. She loved hitting the road in the RV. She and Basil went all over the country exploring national parks along with many other favorite destinations. She loved writing poetry. She wrote and submitted many of her works into contests, winning several awards over the years. However, being with her family is what she enjoyed the most. She is preceded in death by her parents, Richard and Ruby Ham; husband, Basil Bentley; grandson, Spencer Bentley and brother James Ham. Survivors include her children, Danny Bentley and wife Sheila, Mack Bentley and wife Deborah, and Rick Bentley and wife Terry; grandchildren, Sheli Madison and husband James, Angie Chipman, Mindy Chipman, Travis Bentley and fiancee Heather Shada, Tracee McKenna and husband Scott, Shaun Bentley and wife Kelli, Levi Dennis  and wife Jenny, and Lauren Mauritzen and husband Blake; great-grandchildren, Rebecca Wollet, Jessica Wollet, James Madison, Tanner Madison and wife Kyndall, Daylon, Mayliyah, Landon, Kortlind, and Gabriel Firth, Stella Bentley, Ani’ya Shada, Tabitha Pike, Morgan and Katie McKenna, Kemper Bentley, Bentley Dennis and Reid Mauritzen; great-great-grandchildren, Hudson and Brooks Madison, and LaMya Pike.

The family of Josephine Ann Bentley created this Life Tributes page to make it easy to share your memories.

Send flowers to the Bentley family.