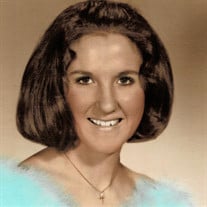 Kathern “Kathy” Williams of Catoosa, Nurse for OU Pediatric Clinic in Tulsa for 37 ½ years, went to be with The Lord Thursday, Dec 9, 2021. Kathern Marie Williams was born in Haskell Oklahoma on November 24, 1952, to James and Minnie Tackett. Kathy was the 3rd of 4 children, Siblings are Ron Tackett, Brenda Caudle and Beverly Seabourne. Kathy Married James Williams in Aug 1973. They had 2 perfect children, Katie in 1974 and Steven in 1976. Kathy and Jim eventually divorced in 1980. Kathy worked her way through college and graduated with her LPN from Tulsa Vo-tech in 1983. From there she went to work at OU Pediatric Clinic on 28th and Sheridan. She lived in Tulsa until 1991, then moved to Inola and lived there until 2009. In 2009 she bought her first home in Catoosa and has lived there since. Kathy is survived by her children; Daughter- Katie Harris and husband, Shawn Harris, their 4 daughters, Brittany and husband Josh Rice, Amanda and husband Grant Ross, Jillian and husband Hunter England and Addeline Harris. Great grandchildren, Dresden, Daxton, Holger, Calvin Rice; Robert England, and soon to come- Delilah Ross. Son- Steven Williams and Wife Shawna Williams, their children, Ashlyn Williams and Bryan Jimenez, and Gage Williams. Brother Ron Tackett and Sister in law, Sandee Tackett and Sister Brenda Caudle and brother in law, Don Caudle. Kathy was welcomed into heaven by her Parents- James and Minnie Tackett, Sister- Beverly Seabourne, grandparents, aunts uncles and cousins.

The family of Kathern Marie Tackett-Williams created this Life Tributes page to make it easy to share your memories.

Send flowers to the Tackett-Williams family.