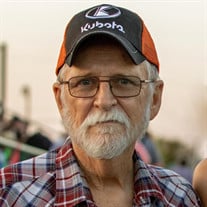 Service for Kenneth Leon Hawkins will be 1:00 p.m., Thursday, May 6, 2021 at MMS-Payne Funeral Home Chapel. Friends may visit at the funeral home on Wednesday, May 5, from 2pm-8pm, with family receiving visitors from 6pm-8pm. Kenneth passed away on Sunday, May 2, 2021.  He was 66 years old.    Kenneth was born on December 23, 1954 in Broken Arrow, Oklahoma to Leon and Josie (Powers) Hawkins. He attended schools first at Oneta and then later at Broken Arrow, graduating with the class of 1973. While in school, Kenneth worked for the maintenance department, mowing the school grounds. Following his schooling he worked as a truck driver for a time and later was a mine supervisor for McNabb Coal Company. His next job was with Nordam, where he worked until his retirement.      On December 20, 1975, Kenneth married Georgie Ellen Wilson at his parents' home in Coweta. The couple made their first home in Oneta, near his grandfather's home. Later they moved to Chelsea, and this has been home since.    When Kenneth wasn't hard at work, he loved to spend time with his family, especially his grandchildren. He enjoyed being outdoors, feeding foxes, deer and hummingbirds, riding his 4 wheeler and had many trails through the woods around his house. Kenneth could make about anything out of wood and constructed his barn out of used and donated material. His love for children extended to those children that were in need. He was a Mason and Shriner who volunteered his time driving children to their appointments at different hospitals around the country.      A wonderful husband, father, grandfather, son, son-in-law, and friend, Kenneth is survived by his wife Georgie of their home in Chelsea; his daughters Misty Simms and husband Shawn of Tulsa, and Brandi Waddell and husband Danny of Chelsea; his son Dustin Hawkins and wife Tiffany of Sapulpa; grandchildren Shane, Slone, Amber, Tyler, Brianna, Dylan, Seth, Lori, Kaylynn, Coby, Lacy, Triston, Hannah, Katlynn, Cheyenne, Randall, Abigail, Averi and Sophie; Liam and a host of great-grandchildren; his second mother Jimmie Helen Hawkins; his brother Dennis Hawkins; his mother-in-law Ellen Wilson, and several aunts, uncles and cousins. Kenneth was preceded in death by his parents and grandparents.

Service for Kenneth Leon Hawkins will be 1:00 p.m., Thursday, May 6, 2021 at MMS-Payne Funeral Home Chapel. Friends may visit at the funeral home on Wednesday, May 5, from 2pm-8pm, with family receiving visitors from 6pm-8pm. Kenneth passed... View Obituary & Service Information

The family of Kenneth Leon Hawkins created this Life Tributes page to make it easy to share your memories.

Send flowers to the Hawkins family.