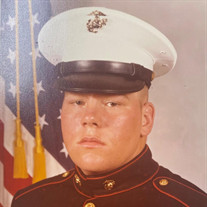 Lynn Bryan Loy was born in Tulsa Oklahoma to Leon and Lou Ann (Lowe) Loy, on February 23rd 1961. He had one sister, LeAnn, who passed at the age of five to neuroblastoma. Shortly after the passing of his sister, Lynn’s father moved away and Lynn was forced to grow up quickly to help support himself and his mother. It was during this difficult time that Lynn developed a love for the outdoors. He would often set off for long hikes, so that he could have time to himself to think. It wasn’t unusual for him to spend hours alone exploring. The peacefulness and serenity of the outdoors was his refuge. He would later fulfill his thirst for nature by backpacking and hiking the Colorado Rocky Mountains. His most notable hike would be Long’s Peak. It was also around this time in his childhood that Lynn discovered his passion for animals. He truly loved all of God’s creatures, but had an especial fondness for dogs. He even had many “private” conversations with his dogs, where he assured them if they spoke back to Lynn, that it would be their own little secret. After graduating high school from Charles Mason in 1979, Lynn was seeking a sense of direction and felt a call to purpose. He answered that call by joining the United States Marine Corps in April of 1980, where he served as a mortarman in the 2nd battalion 5th Marines. After a service related injury, Lynn was honorably discharged from the Marines in the summer of 1982. Lynn completed his active career with the title of Lance Corporal, and was awarded the rifle sharpshooter badge. While his active career was short in duration, his identification as a Marine was eternal. Lynn was a true American Patriot who lived and breathed for his country. And while his term was limited, the stories and the memories he gathered during this time were not! After his discharge, Lynn pursued further education at the Oklahoma State Technical College, where he studied diesel and heavy equipment. He worked a part time job at Wal-Mart in Okmulgee Oklahoma, where he met the love of his life, Linda Loague. The two struck an immediate connection and were married on June 2nd, 1989. Lynn and Linda shared two daughters, Courtney and Katrina Loy. The next year, the family moved to their current residence in Foyil, Oklahoma. At the time, Lynn and his family were living under limited means and their home was very modest and in need of repair. Luckily for his family, Lynn was the ultimate of handy men. He would spend the next thirty years pouring his love into their home through the gift of his labor. Among an endless list, Lynn added: an entire second story to the home, a picturesque fish pond, a state of the art greenhouse for Linda, and most recently, a resort style lodge on the back of the home. He was known by all as a “fix it” guy. If you needed something done, he knew how to do it, and he was always willing to help. From a very young age, Lynn was a free and independent spirit. He lived life with a passion and a sense of no regret. He did everything to the extreme, and the way he loved his family was no exception. Lynn was a true family man, who loved his family with an intense and deep passion. He loved deeply, fearlessly, and unapologetically. Anyone who has ever met Lynn knows how proud he was of his family, and if you had never met him – you would quickly learn. He loved spending time with his daughters and his grandkids. He played many important roles it their lives, including: Father, Poppy, Coach, Mentor, Teacher, Confidant, Advisor, and Friend. His family will miss and love him forever, while he waits for us in heaven. Lynn is survived by his Wife, Linda Lee Loy; daughter, Courtney Dawn Herndon and Husband Kyle Lee Herndon, his daughter Katrina LeAnn Herndon and husband Keith Ryan Herndon; Five grandchildren; Kylee Jay Herndon, Kolton James Mays, Jaevyn Lynn Herndon, and Harper LeAnn Herndon; and a host of other friends who love him dearly.

Lynn Bryan Loy was born in Tulsa Oklahoma to Leon and Lou Ann (Lowe) Loy, on February 23rd 1961. He had one sister, LeAnn, who passed at the age of five to neuroblastoma. Shortly after the passing of his sister, Lynn&#8217;s father moved away... View Obituary & Service Information

The family of Lynn Bryan Loy created this Life Tributes page to make it easy to share your memories.

Lynn Bryan Loy was born in Tulsa Oklahoma to Leon and Lou Ann...

Send flowers to the Loy family.